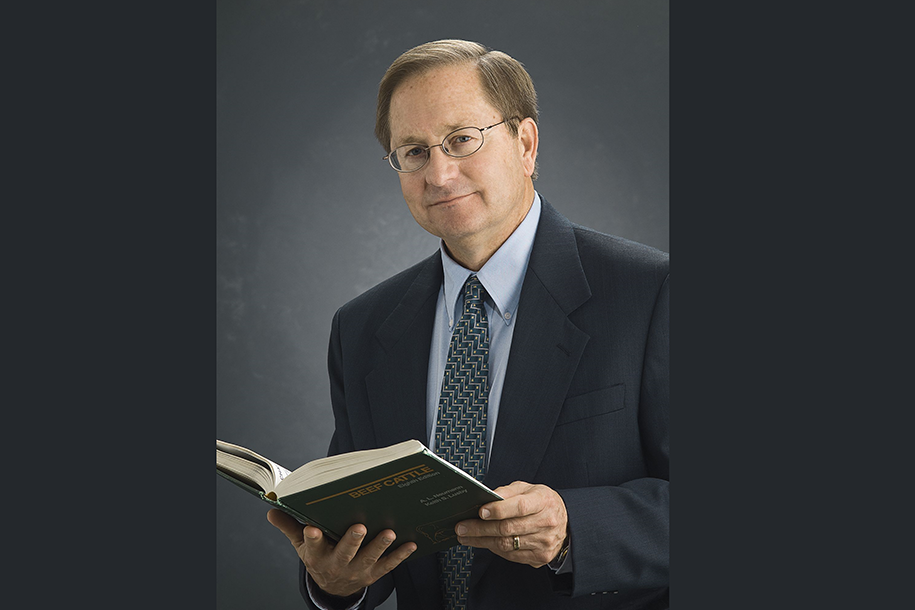 URBANA, Ill. – Lifelong beef production devotee Doug Parrett was technically retired from the University of Illinois, but the emeritus professor never stopped showing up for the Department of Animal Sciences, the College of Agricultural, Consumer and Environmental Sciences (ACES), or the beef industry. Still an active teacher, mentor, and friend to many, Parrett passed away unexpectedly on August 26, 2022. He was 71.

Parrett came to U of I as a freshman in 1969 and stayed for his master’s and doctoral degrees, during which he taught his first classes as a lecturer and graduate teaching assistant. In 1981, Parrett took a faculty position in the Department of Animal Sciences. He served in many roles, including educator, livestock judging coach, Extension specialist, research collaborator, and interim department head.

“Dr. Parrett’s lasting impact is immeasurable. He was a wonderful teacher, colleague, friend, and mentor to everyone in the department and beyond. Everywhere I went in Illinois, people would ask about Dr. Parrett and have a story about his positive impact. He will be missed personally and professionally,” says Rodney Johnson, head of the Department of Animal Sciences. “Dr. Parrett was uniquely special in the best possible way.”

Known as a “teaching icon” in the department, Parrett inspired countless undergraduates through his 49-year teaching career, including those in the beef production class he was teaching this semester. Not only did he bring his infectious enthusiasm for the subject matter, he invested countless hours getting to know students’ individual goals and providing personalized guidance. Parrett’s teaching talents won him dozens of national and campus awards, and his dedication to undergraduate education led him to revamp the entire departmental curriculum and create at least five new courses.

Parrett’s appointment as a faculty Extension specialist put him on the front lines of the beef production industry, where he worked with producers to ensure optimal health and productivity of Illinois herds and the success of the people who care for them. Parrett made it his mission to improve beef quality in Illinois through superior genetics and education, creating hands-on programs and user-friendly guides that empowered cattlemen to make positive changes in their management practices.

As a longtime livestock judging coach, Parrett mentored hundreds of students who went on to become leaders in the animal production industry. A world-renowned judge of purebred and commercial beef cattle, his excellent evaluation skills were recognized by numerous breed associations and animal exhibitions around the globe.

Above all, Parrett was a devoted friend and mentor.

“He always prioritized people and loved to talk – in classes, office hours, farm visits, producer meetings, fairs, conferences, phone calls, emails, texts, etc. It didn’t matter where, how, or who the audience was. It could be a first-semester freshman from the suburbs, a long-time beef cattle producer, or a young livestock enthusiast. Dr. Parrett had a special ability to connect with them, make them feel important, and provide meaningful and impactful advice,” says Dan Shike, associate professor in animal sciences and longtime mentee of Parrett’s.

Parrett is survived by his wife Susie, son John, and daughter Annie. The family has requested that memorials be directed to the University of Illinois Foundation for the Dr. Doug Parrett Memorial Fund. Please send to the University of Illinois Foundation, Harker Hall, 1305 W. Green Street, Urbana, IL 61801. Contributions may be provided online at www.giving.illinois.edu. Include the fund name in the “Other” field of the giving form.

A visitation is scheduled between 4 and 7 p.m., Tuesday, Sept. 6 at the Stock Pavilion, and a funeral mass is scheduled for 10 a.m. on Wednesday, Sept. 7 at St. John’s Catholic Newman Center, 604 E. Armory Ave in Champaign.