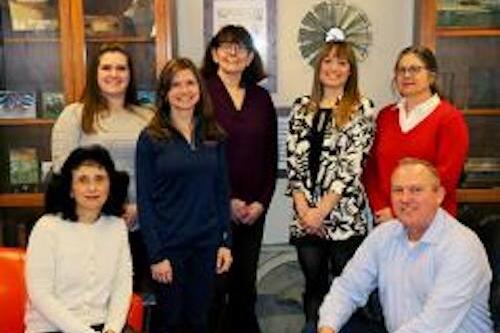 URBANA, Ill. – Research in the Department of Animal Sciences at the University of Illinois spans multiple disciplines, from production agriculture to neuroscience. This breadth of expertise is one reason several researchers in the department were recently awarded a $1.62 million, five-year research grant from the National Institutes of Health and the U.S. Department of Agriculture’s “Dual Purpose for Dual Benefit” program.

“The NIH and USDA are looking for investigations that could help with food security and animal production but that can also be applied to biomedical research. Our research team is in a great position to achieve that,” says Sandra Rodriguez-Zas, professor of bioinformatics in the department, and a co-principal investigator on the grant.

The researchers are studying stress resilience and want to know what happens to the offspring when mothers develop an infection during pregnancy. A number of studies have investigated the effects of so-called maternal immune activation, but most of the work has been done in rodents and the results don’t always translate well to other species.

The new study will focus on maternal immune activation and stress resilience in pigs. This is important, Rodriguez-Zas says, because the anatomy and physiology of pigs resembles that of humans. It also has relevance to pig production because less resilient animals may experience illness or slow weight gain due to a prolonged or exaggerated stress response. “The study has the advantage of simultaneously being applicable to animal production systems and to human health,” she says.

Previous studies have only followed piglets to about four weeks of age, while they are still infants. Without taking the animals through weaning or other transitions that happen in later development, it’s impossible to predict the long-term effects of maternal infection. That’s why the researchers plan to track the pigs up to puberty.

“We’re looking at metabolism, reproductive physiology, and immunological indicators throughout the pigs’ development. And also tracking the hypothalamus, the master regulator that controls everything from appetite to behavior to immune response,” says Rodriguez-Zas. “It’s a truly unique multidisciplinary project.”

Rodney Johnson, professor of integrative immunology and behavior in the department and co-principal investigator, adds, “We’re very excited to understand what effects maternal immune activation might have on offspring as they transition from a liquid sow-milk diet to a solid corn-soy diet.”

Megan Dailey, assistant professor in the department and co-investigator on the project, says, “Understanding the impact of maternal immune activation on the development and functioning of the hypothalamus and its effects on homeostasis could ultimately enhance the health and growth of pigs for production and help in developing disease treatments for humans and other animals.”

Romana Nowak, professor of reproductive physiology in the department and co-investigator, highlighted that her group will determine whether exposure of the young piglets to maternal immune activation during pregnancy could result in delays in normal reproductive-tract development and function at puberty.

“Prolonged exposure to stress is known to have detrimental effects on the reproductive axis in adult animals,” Nowak says, “but this has not been studied in great detail in young animals.”

The researchers think pigs whose mothers had an infection during pregnancy may be less resilient to stress during critical periods. In pigs, that can manifest as an animal that won’t gain weight or won’t engage in normal social behaviors in group housing scenarios. In humans, scientists think there’s a potential link to autism or schizophrenia.

“We know there are certain life stresses that are unavoidable, and we know there are inter-individual differences in how people or animals deal with that stress. Having a stress response is not unusual, but what’s critical is that the response not be overzealous. Animals whose mothers had an infection may have prolonged or exaggerated stress responses, and this study will tell us that,” Johnson says.

“The five-year grant will support many undergraduate and graduate researchers, as well as postdoctoral scholars,” Rodriguez-Zas says, “and will offer exceptional experiential learning opportunities using cutting-edge technologies at U of I.”