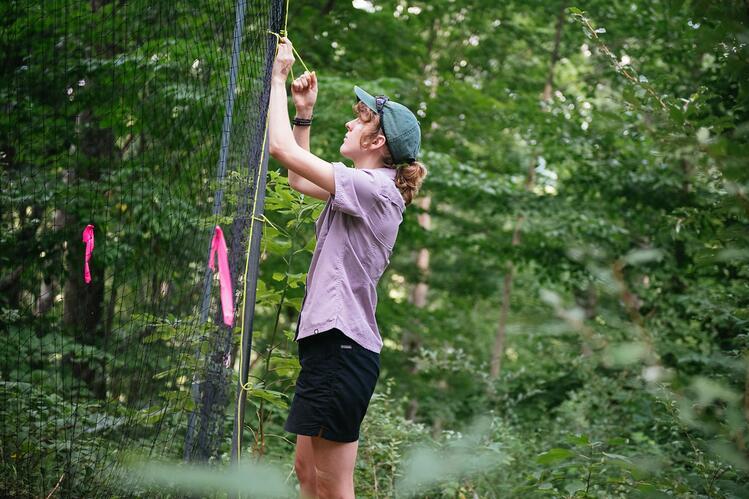 URBANA, Ill. – Bats help keep forests growing. Without bats to hold their populations in check, insects that munch on tree seedlings go wild, doing three to nine times more damage than when bats are on the scene. That’s according to a groundbreaking new study from the University of Illinois.

“A lot of folks associate bats with caves. But as it turns out, the habitat you could really associate with almost every bat species in North America is forest. And this is true globally. Forests are just really important to bats,” says Joy O’Keefe, study co-author and assistant professor and wildlife extension specialist in the Department of Natural Resources and Environmental Sciences at Illinois. “We wanted to ask the question: Are bats important to forests? And in this study, we've demonstrated they are.”

Other researchers have demonstrated bats’ insect-control services in crop fields and tropical forest systems, but no one has shown their benefits in temperate forests until now.

“It's especially important for us to learn how bats affect forests, given that bats are declining due to diseases like white-nose syndrome or collisions with wind turbines. This type of work can reveal the long-term consequences of bat declines,” says Elizabeth Beilke, postdoctoral researcher and lead author on the study.

The research team built giant mesh-enclosed structures in an Indiana forest to exclude the eight bat species that frequent the area, including two federally threatened or endangered species. The mesh openings were large enough to allow insects free movement in and out, but not flying bats. Every morning and evening for three summers, Beilke opened and closed the mesh sides and tops of the structures to ensure birds had daytime access to the plots. That way, she could be sure she was isolating the impacts of bats.

Beilke then measured the number of insects on oak and hickory seedlings in the forest understory, as well as the amount of defoliation per seedling. Because she erected an equal number of box frames without mesh, Beilke was able to compare insect density and defoliation with and without bats.

“We know from other research that oaks and hickories are ecologically important, with acorns and hickory nuts providing food sources for wildlife and the trees acting as hosts to native insects. Bats use both oaks and hickories as roosts, and now we see they may be using them as sources of prey insects, as well. Our data suggest bats and oaks have a mutually beneficial relationship,” Beilke says.

While insect pressure was intense in plots without bat predation, the seedlings didn’t succumb to their injuries. But the researchers say long-term bat declines could prove fatal for the baby trees.

“We were observing sublethal levels of defoliation, but we know defoliation makes seedlings more vulnerable to death from other factors such as drought or fungal diseases. It would be hard to track the fate of these trees over 90 years, but I think a natural next step is to examine the impact of persistent low levels of defoliation on these seedlings,” Beilke says. “To what extent does repeated defoliation reduce their competitive ability and contribute to oak declines?”

The researchers point out that birds, many of which share the same insect diets as bats, are also declining. While they specifically sought to isolate bats’ impact on forest trees, the researchers are confident insect density and defoliation rates would have been higher if they had excluded both birds and bats in their study. In fact, similar exclusion studies focusing on birds failed to account for bats in their study designs, leaving mesh enclosures up all night.

“When we were initially working on the proposal for this research, we looked at 37 different bird exclusion studies, across agriculture and forest systems. We found nearly all of them had made this mistake. Most of them had not opened or removed their treatment plots to bats,” Beilke says.

In other words, before Beilke’s study, birds were getting at least partial credit for work bats were doing in the shadows.

Clearly, both types of winged predators are important for forest health in temperate systems. And, according to O’Keefe, that makes these studies even more critical to inform forest management.

“I think it’s important to stress the value of this type of experimental work with bats, to really try to dig into what their ecosystem services are in a deliberate manner. While we can probably extrapolate out and say bats are important in other types of forest, I wouldn't discount the value of doing the same kind of work in other systems, especially if there are questions about certain insect or tree species and how bats affect them. So rather than extrapolating out across the board, let's do the work to try to figure out how bats are benefiting plants,” she says. “And before they're gone, hopefully.”