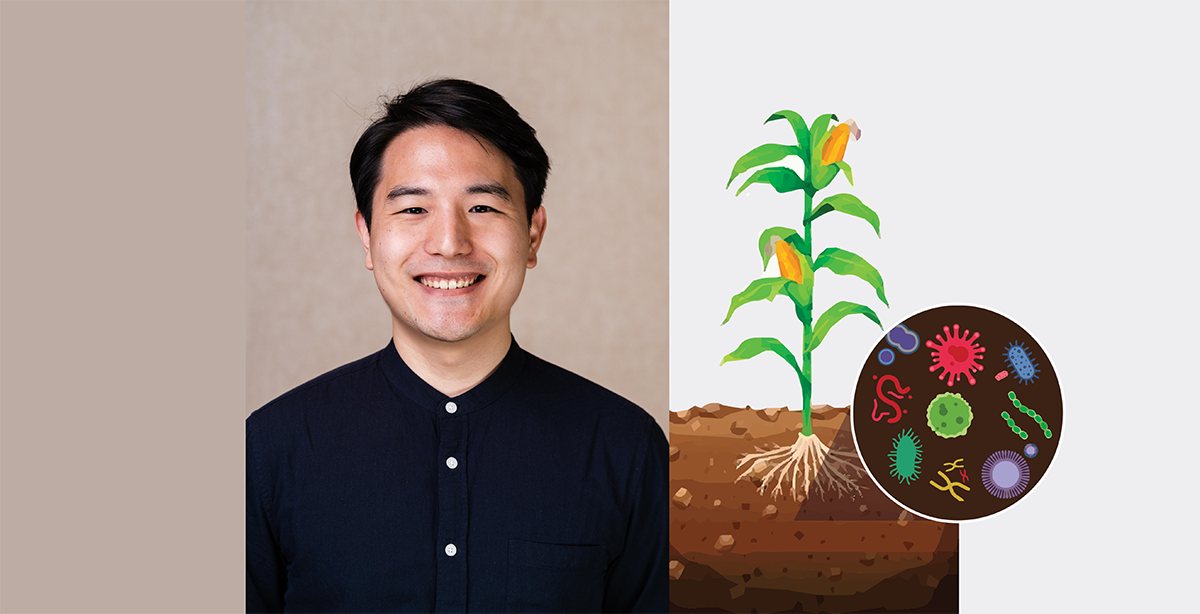 URBANA, Ill. – Although about 20% of Illinois cropping systems are planted to continuous corn, it’s nearly impossible to find fields planted this way for decades at a time. Yet long-term experiments like one at the University of Illinois, including over 40 years of continuous corn under different nitrogen fertilizer rates, provide incredible learning opportunities and soil management lessons for researchers and farmers alike.

That’s particularly true for studies of the soil microbiome, including two led by Nakian Kim, a doctoral graduate from the Department of Crop Sciences at U of I. For Kim, the long-term experiment provided a unique, biologically stable setting to explore baselines and observe microbial responses to the inclusion of cover crops, a change in management introduced in 2018 and supported by a USDA-NIFA award to María Villamil’s team.

“In the Midwest, our soils are healthy and resilient, but we shouldn’t overestimate them. A soil under unsustainable practices for too long might reach an irreversible threshold,” Kim says.

“Most studies have looked at the microbes very generally, at the phylum level. But even a single phylum may have incredibly vast microbial diversity. Analysis at such levels could not provide insights with enough details, so I looked deeper,” Kim says. “Genus-level responses or stasis can tell us how a soil and its microbial community are responding to soil management practices.”

For example, he found both long-term fertilization and cover crops favored microbes that could increase the risk of nitrous oxide emissions. Meanwhile, cover crops also enhanced soil biodiversity, as microbes with more diverse niches and functions were associated with this practice. Details like these – especially that cover crops can have both positive and negative effects on soil microbes – may have been missed with the broader microbial analyses of the past.

In a second study, published in Frontiers in Microbiology, Kim focused on nitrogen cycling by identifying microbial functional genes in soil, rather than characterizing microbes themselves.

“Applying a lot of nitrogen fertilizers definitely disrupted nitrogen cycling communities,” Kim says. “Ammonia-oxidizing archaea decreased significantly with fertilization, but bacteria were not that responsive. Within denitrification communities, those harboring the nitrite-reducing nirK gene were not as sensitive, while others with the nirS gene were negatively affected.”

“If a system is exposed to disruption of nitrogen-cycling microbial communities long enough, it may develop resistance to conservation practices,” Kim says.

In other words, two years of cover cropping may not have been enough to undo the damage of 36 years of continuous corn and nitrogen fertilizer application. But Kim is keen to test the effects of longer-term cover crop management.

Villamil, professor in the Department of Crop Sciences and co-author on both papers, says, “Our Midwestern soils are resilient in ways that we might not have anticipated. A closer scrutiny reveals microbial communities are reacting dynamically to unsustainable practices and adapting to the resulting soil conditions. Reverting these changes may take tremendous effort and time, and cover cropping should be one of many strategies we deploy to increase the spatial and temporal diversity of our agricultural systems to protect our soils and our future on this planet.”

Both studies were funded by the USDA-NIFA Award [AG 2018-67019-27807], “Understanding shifts in the microbial N cycle with inclusion of cover crops into long-term agricultural experiments and their links to soil health and productivity.”