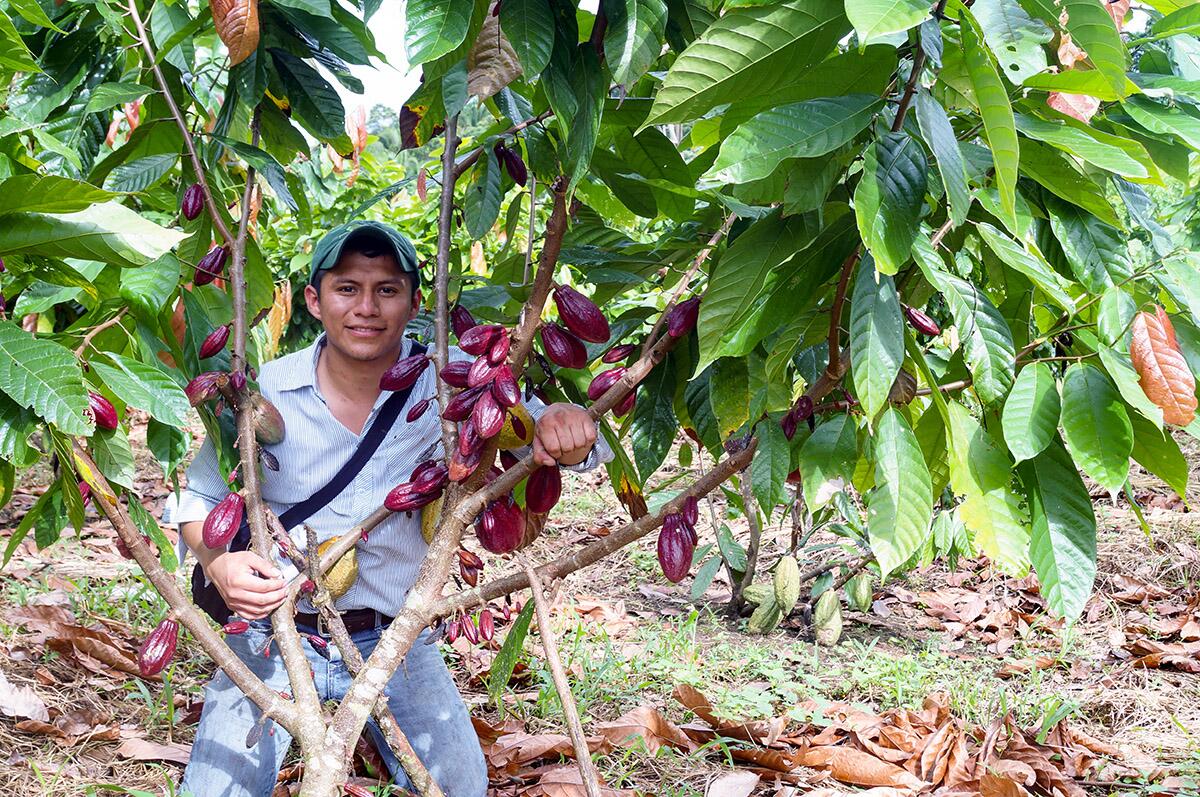 URBANA, Ill. – Committed chocoholics, be warned. A health-robbing heavy metal, cadmium, lurks in the velvety recesses of your favorite indulgence.

Researchers have chased the source of cacao’s cadmium contamination for years, but an array of distinct sampling methods and sites led to mixed results. In a new analysis, University of Illinois scientists consider the soil factors influencing cadmium’s ride into cacao beans, with the aim of recommending feasible and cost-effective ways farmers can minimize uptake.

“Instead of trying to glean universal drivers of cadmium uptake from single studies conducted here or there, we said, ‘let's look at this across the entire Cacao Belt,’” says Jordon Wade, who coordinated the effort as a postdoctoral researcher at U of I. Wade is now an assistant professor at the University of Missouri.

Wade worked with graduate students in the College of Agricultural, Consumer and Environmental Sciences (ACES) at Illinois, as well as crop sciences assistant professor Andrew Margenot. Together, they re-analyzed thousands of data points reported in dozens of published studies from cacao cropping systems around the world. Their synthesis appears in PLOS ONE.

“We found it was the total amount of soil cadmium and pH that explained the amount of cadmium that ends up in the bean,” Margenot says. “It seems a little too simplistic, but it is consistent with soil chemistry theory. When you get into more acidic pH values, cadmium is more soluble and more available to the plant. That was the major takeaway.”

Understanding the routes of cadmium into the bean is the first step to mitigating its uptake, the researchers say. And there’s more reason than ever to keep cadmium levels low.

Recent EU regulations cap cadmium at 0.1 to 0.8 milligrams per kilogram, depending on the cocoa product. Margenot says the standard is forcing many companies to limit imports from cacao-producing regions in the global south where soils are naturally high in the heavy metal.

While cadmium in cocoa products is a legitimate health concern – chocolate is a leading source of dietary cadmium in non-smokers – the regulation is bad news for 8 million smallholder farmers for whom cacao is an important cash crop.

“These farmers might make $1,000 a year if they're lucky. Heavy metal remediation is out of reach for them,” Margenot says. “So, after finding that soil pH and total cadmium are the biggest factors that control cadmium in the bean, we’re finding evidence pointing to lime as a mitigation measure.”

Liming soils brings down the acidity, making cadmium less soluble and less likely to be taken up by plants. But Margenot admits liming isn’t necessarily simple or affordable – or even accessible – for Amazonian farmers. The product isn’t likely available at the corner store, and although lime is relatively inexpensive in the U.S., it’s not cheap in high-poverty contexts.

Despite these challenges, Margenot says lime generally increases yield for cacao. Because it could have dual benefits, liming could be worth the effort and cost.

“If you're going to ask people to invest in expensive inputs, assuming they can find them, it's nice if they can deliver multiple benefits,” he says.

In their review, Wade and Margenot noted studies reporting variation among cacao cultivars in terms of cadmium uptake. Could plant breeding be the answer?

“It's really tough to fight soil chemistry on anything, so breeding cacao varieties or rootstocks that are less susceptible to uptake might be one way out of this. The problem is that most of the world’s fine cacao is grown by small farmers, largely in South America, on maybe 1 or 2 hectares,” Margenot says. “They can't really afford to invest in new germplasm.”

Although the study offers no silver bullet for impoverished growers, it provides a map for future research.

“By critically evaluating the available data and methods, we now know total cadmium and pH are key factors. We also found things like sampling depth matter. Those factors are not currently standardized across studies. It’s kind of a mess,” Margenot says. “As a community of researchers, we could be doing a lot better. But now we know a way forward.”

Wade adds, “There are lots of strategies we can try, like matching rootstocks to soil conditions. Our results here help us better direct our energy and resources.”

By the way, neither researcher plans to stop indulging in chocolate, despite the dangers of cadmium.

“I've eaten cacao beans from farms in Ecuador without hesitation. It takes a lot of chocolate to get to dangerous levels for adults,” Margenot says. “I think it's fair to say people shouldn't stop eating chocolate.”

Wade adds, “Especially here in the U.S., where so many people eat milk chocolate. It has much lower cacao content, and therefore much lower cadmium content. And chocolate companies blend cacao sources and make other efforts to reduce cadmium in their products. But for me, personally, I still enjoy dark chocolate.”

The article, “Drivers of cadmium accumulation in Theobroma cacao L. beans: a quantitative synthesis of soil-plant relationships across the Cacao Belt,” is published in PLOS ONE [DOI: 10.1371/journal.pone.0261989]. Co-authors include Jordon Wade, Vitor Favoretto, and Andrew Margenot of the Department of Crop Sciences; and Marlon Ac-Pangan, Alexander Taylor, and Nicki Engeseth of the Department of Food Science and Human Nutrition. Both departments are in the College of ACES at the University of Illinois Urbana-Champaign.