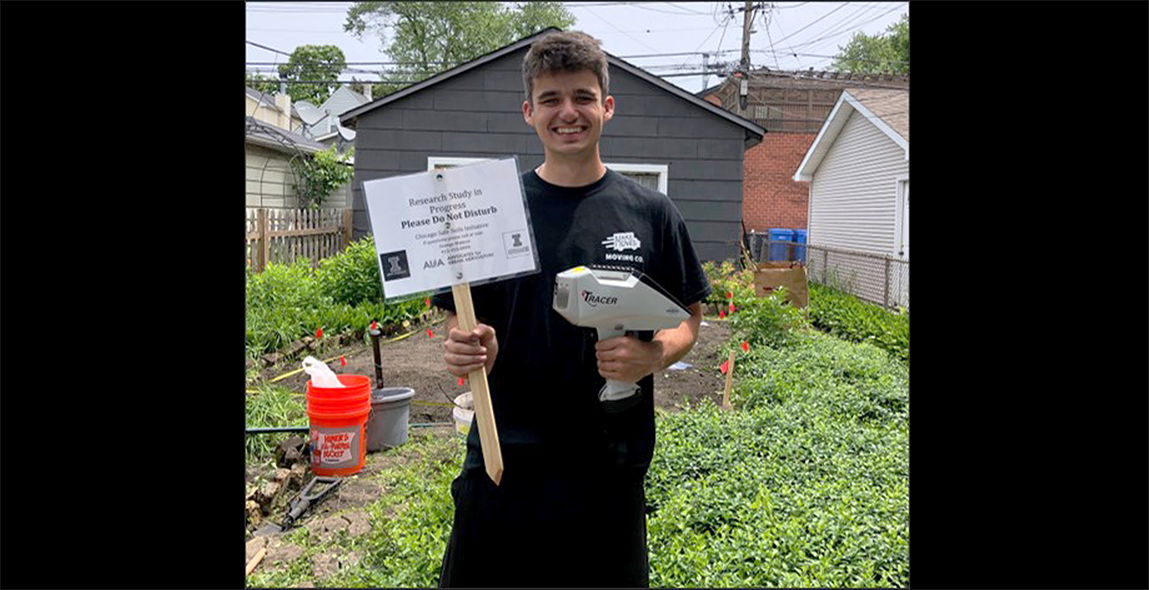 URBANA, Ill. – Lead exposure in early childhood can have lifelong consequences, including brain damage, developmental delays, and learning and behavioral disorders. Preventing these devastating outcomes means avoiding lead, but that’s only possible if you know where to find it.

Lead haunts old homes in chipping paint and pipes, but it also lurks outside, in soil. It’s the stuff of mud pies and garden plots, crumbling from boot treads to join household dust in forgotten corners. It’s easily overlooked, but soil can be an important source of lead where children live and play.

A new soil sampling endeavor from the University of Illinois and Illinois Extension reveals elevated lead in parkways and backyards across Chicago. According to the study, every single sample measured lead above the naturally occurring level of 20 parts per million (ppm). And the median value across the city’s parkways was 11 times that amount: 220 ppm.

“The previous soil lead assessment of Chicago took only 57 samples, so we went up by orders of magnitude,” says Andrew Margenot, assistant professor in the Department of Crop Sciences at U of I and lead author on the study. “But we found the same result overall – approximately 10 times enrichment above naturally occurring soil lead levels.”

The U.S. Environmental Protection Agency sets the maximum threshold for soil lead at 400 ppm for bare soil where children play, and Illinois uses the same standard. Other states, such as California and Minnesota, set the threshold far more conservatively at 80 and 100 ppm, respectively.

In Chicago, 93% of soil samples came in above 80 ppm. But, using the federal and Illinois EPA standard, 94% of the samples were below the threshold of 400 ppm.

“We're in this weird gray area, where depending on what government guidelines you follow, you're either OK or you're not for most of the city,” Margenot says. “Frankly, though, I was surprised our mean values weren't higher. Individual backyards in this study measured as high as 3,000 ppm and many U.S. cities have hotspots far exceeding that. So it could have been a lot worse.”

The team found lead unevenly distributed across Chicago’s metro area. Broadly speaking, lead levels fell off in concentric rings around the city center, known as the Loop. But localized hotspots threw off what could otherwise have been a tidy correlation between lead levels and distance from the Loop.

“It was in the south, especially the southeast shore, where we found the highest amount. We also detected higher-lead pockets to the west, where you find Garfield Park, and then also going up north where you typically find higher-income areas,” Margenot says. “The pattern reflects the historical nature of lead contamination, back when lead paint and leaded gas were used. More houses, more car traffic, more lead was put down in these areas.

“There's a strong environmental justice reality here,” he adds. “Under-resourced communities, especially African Americans in Chicago, are disproportionately affected by these contaminants. Redlining policies forced Black Americans into the parts of cities that were typically the worst polluted. This problem is not going away. City leaders and society as a whole need to be willing to invest in monitoring and mitigation efforts to remedy the situation.”

Chicago citizens can check their general area against Margenot’s map, but despite his team’s high-density sampling efforts, the map can’t pinpoint lead levels for an individual address. He’s working with the Chicago Urban Agriculture Mapping Project to add soil lead to their interactive map, and the data has already been integrated into MapMyEnvironment, an open-source database to visualize environmental hazards. For now, Margenot says people should get their soil tested if they live in high-lead neighborhoods before gardening or sending the kids out to play.

Some parts of the city, specifically near both local airports – O’Hare and Midway – were surprisingly low in lead.

“Leaded gasoline is still used in airplane fuel – small engines like Cessnas – but not jet fuel. A lot of stakeholders we talked to thought the airports must be full of pollutants, but they were fine with respect to lead. So that's good news,” Margenot says.

Although the research team focused on lead in this study, they analyzed a subset of samples for other heavy metals including mercury, cadmium, and arsenic. Margenot says these metals didn’t co-occur with lead.

That’s not necessarily a good thing.

“In some cities where the source of contaminants is the same, like a smelting operation, all the nasty things are co-deposited together. So if you measure lead, one of the easier heavy metals to measure, you know there’s a risk for all the other metals. That's not the case here, which speaks to the diverse sources of metal contaminants in Chicago,” he says. “That's an unfortunate finding. It means just because you have low lead doesn't mean you have low arsenic or cadmium, which can be enriched in these soils.”

The sampling effort provides a blueprint for other cities interested in mapping soil lead contamination. Margenot’s team collected nearly 1,000 soil samples from parkways, that strip between sidewalks and roadways often zoned as public land. Another 156 were collected by citizen scientists from backyards across the city. Although the sample sizes differed significantly, statistical comparisons showed the two types of soils could produce city-wide maps of lead with very similar patterns and levels.

“In backyards, we think most lead is coming from leaded paint, versus roadways where lead is most likely a remnant from leaded gasoline. But the two types of samples gave us a similar distribution of lead across the city. That’s good, because if you have to go door to door knocking, it takes longer to develop city-wide assessments.” Margenot says.

The article, “Soil lead distribution in Chicago, USA,” is published in Geoderma Regional [DOI: 10.1016/j.geodrs.2021.e00480]. Co-authors include George Watson, Nicolas Martin, Zachary Grant, Sarah Batka, and Andrew Margenot. Users who wish to visualize the map on MapMyEnvironment can visit the website and choose soil and lead in the dropdown menus.

The work was supported by an Illinois Extension Collaboration grant from the College of Agricultural, Consumer and Environmental Sciences at the University of Illinois; a Future Interdisciplinary Research Explorations (FIRE) award; and Hatch funds from the U.S. Department of Agriculture.