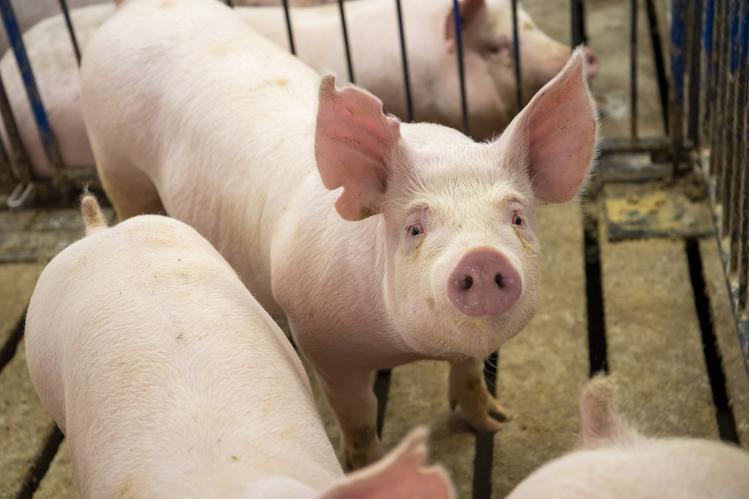 URBANA, Ill. – Adding a fat source to the traditional corn-soy swine diet is common practice, but the type of fat can make a difference both for growing pigs and carcass quality. Polyunsaturated fats, the primary type in distillers dried grains with solubles (DDGS), can reduce fat quality and complicate processing of pork bellies and bacon.

High oleic soybeans, high in monounsaturated fats, create a stable oil valued by the food industry and nutritionists concerned with heart health. And according to new University of Illinois research supported by the United Soybean Board, high oleic soybean oil performs well as a DDGS substitute both for growing pigs and pork processing characteristics.

The research team fed growing pigs a standard corn-soybean meal finishing diet, plus DDGS or high oleic soybean oil (HOSO) as a fat source. They included DDGS at 25% and the HOSO at 2%, 4%, or 6% of the complete diet.

“When we fed the high oleic soybean oil, we saw reduced average daily feed intake, which makes some sense because as we include more energy in diets, pigs will usually consume less. The pigs were more efficient in converting that diet into pounds of gain,” says Bailey Harsh, assistant professor in the Department of Animal Sciences at Illinois and lead researcher on two new studies in the Journal of Animal Science.

In addition to growth performance, the first study focused on overall carcass characteristics.

“When we think about what is important to producers or to the standard commercial finisher, it’s how those pigs perform and yield in terms of carcass weight and fat free lean. We wanted to make sure all of that was in one study so a producer could look at that and say, well, here's the impact on my bottom line,” Harsh says.

The researchers found minimal differences in primal weights across the diets, but the overall trend showed greater fat thickness and reductions in fat-free lean as the HOSO percentage went up.

“As we added more fat to the diet, moving from 2% to 6%, the pigs grew more efficiently but were a little bit fatter and their carcass cutability dropped just a little bit, but not enough that we would be too concerned,” Harsh says.

A second study focused solely on loin and belly quality, including palatability, from the same set of pigs. Drilling down allowed the researchers to evaluate whether the diets affected the highest-value primal cuts.

“Bacon quality, as well as belly quality, is relatively dependent on a pig’s diet,” Harsh says. “If pigs are consuming a standard DDGS-containing diet which has more polyunsaturated fatty acids, those pork bellies will also be more unsaturated. We usually think about unsaturated fats as being very soft or liquid at room temperature, so you can have problems with softness of the bellies that can make them hard to slice. The loin is another primary outcome, so we needed to make sure we didn't have any major impacts on the loin either.”

Harsh says she saw very little impact on palatability, oxidation, or belly and loin quality in pigs fed HOSO compared with the DDGS diet. As expected, bellies from HOSO-fed pigs were thicker and firmer, with a higher proportion of monounsaturated fatty acids compared with DDGS-fed pigs. And loin chops were just as tender, juicy, and flavorful in the HOSO-fed pigs as pigs fed the industry standard supplement.

Although the researchers evaluated three HOSO inclusion levels in the studies, they didn’t specifically intend to make a recommendation for the swine feed industry. However, based on their results, Harsh says the 4% level looks promising.

“If we're talking about maximizing lean growth traits, the 2% is probably best because those pigs are a little bit less fat. But the 4% level probably is best for improving the thickness of bellies and making them a bit firmer, without compromising lean percentage to the same degree as the 6% level,” she says. “Looking at all the traits together, the 4% HOSO inclusion seemed to be the sweet spot.”

Although HOSO achieves good growth and meat quality characteristics, Harsh notes producers may pay a premium for the ingredient for now.

“Diet cost per pound of pig weight gain was actually a little more for HOSO than the DDGS diet. However, we really think most of that is a factor of availability,” she says. “DDGS are plentiful, so cost is lower. HOSO currently makes up a small portion of the total market, so it is more expensive. But as high oleic soybean production increases, the price for HOSO will eventually go down.”