From student to researcher: validating fertilizer quality in Tanzania 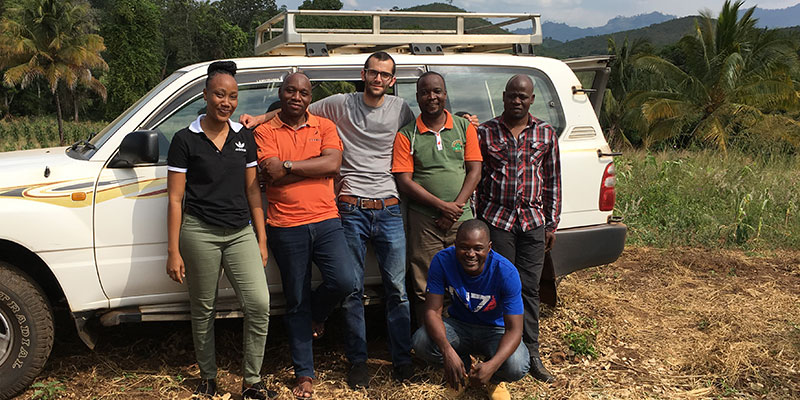 After being awake for 30 hours, I’ve landed in Dar es Salaam. The occupants of the plane are herded downstairs to a hot, humid room and get in line. An immigration official looks at my entry form and asks me a few questions and makes one change to my form – my occupation is no longer “student” but “researcher.”

I’ve come to Tanzania to work with the International Institute of Tropical Agriculture (IITA) to study how ambiguity about quality affects both smallholder farmers’ beliefs about and willingness to pay for mineral fertilizer. This research trip comes after my first year of graduate school; I am privileged to start field research so early on. During this past year I started working on the project with Dr. Hope Michelson, assistant professor in the Department of Agricultural and Consumer Economics at the University of Illinois and Dr. Jessica Hoel, assistant professor of economics at Colorado College. I was fortunate enough to win three grants and fellowships to support this work: The IITA Graduate Research Fellowship creates the partnership with IITA and allows me to be advised by Dr. Victor Manyong, Director of the East Africa Hub of IITA, the ACES Graduate Student International Research Grant funds my travel to Tanzania, and the ACES Global Food Security Graduate Fellowship funds a large portion of the research itself. After a year of preparation, I am finally here.

The first full day here, a Friday, I visited the IITA office to get acquainted with the staff and area. I met with Dr. Manyong then went back to the hotel for a much needed nap. My advisor, Dr. Michelson, arrived late that Friday. The next day we had a longer meeting with Dr. Manyong and two other economists working at the IITA offices. A welcome addition to the meeting was Anna Fairbairn, a graduate of the ACES Master’s Program who now works for One Acre Fund in Tanzania. We discussed ongoing research projects and the directions for where my research would go. After the meeting Anna and Dr. Michelson and I left to get some supplies and groceries while in Dar es Salaam. I got a new SIM card to allow me to communicate during my six weeks here, and I got a gift for my girlfriend; I think I spent more time searching for that gift than getting supplies on Saturday! After a long day of meetings we retired back to the hotel for dinner and a drink.

The second day here we parted ways with Anna and made the five hour drive to Morogoro Town. Dr. Michelson and I were originally going to stay at the Visitor’s Hostel at Sokoine University of Agriculture (SUA), but we found out upon arrival that there wasn’t internet there! Needing internet to work, we moved to the Morogoro Hotel. We had dinner that night with Dr. Christopher Magomba, a professor in SUA’s Agricultural Economics Department and longtime collaborator of Dr. Michelson.

The third day – Monday – is when we really got down to business. Dr. Michelson had bought 16 50kg bags of urea fertilizer in Morogoro and had samples of each tested at the U of I. I would be using the fertilizer in an experimental auction with farmers to assess their actual willingness to pay for a kilogram of urea. The bags are stored in a shed near the SUA campus, so I picked up two of them Monday with Joshua Kayaga, my field manager. After running some more errands – buying supplies for the surveys, hitting up an ATM, and getting out 1,000 200TSH coins for the auction – we returned to the hotel to begin training the enumerators. Joshua had picked out Haule, Rajabu, and Aika. They learned quickly and asked great questions about how to actuallyask a farmer a question to get the type of answer I wanted. That’s something I learned – it’s easy to think of a survey question while in my office at the U of I, but transforming it into a question that will actually work in the field is a difficult and iterative process. Fortunately, the enumerators and Joshua have provided a wealth of suggestions and help. After training the enumerators Dr. Michelson and I worked until 11 PM editing suggestions and comments into the survey. It was a long day and the next would be longer – we would be field testing the survey!

Tuesday was the first field test. We drove to Mkambarani not knowing how long we would be there. The survey is complicated – the auction is intricate and takes some time to explain, and there is an ambiguity aversion and risk aversion module (two multiple-price lists) that can be tricky, too. Joshua expected the survey to take a while; Dr. Michelson expected around an hour and half, and I erred on the very conservative side with two hours. The survey only took an hour when we field tested it! Each enumerator and Josh gave the survey once, yet after the field testing they had many, many suggestions. We reconvened at the hotel dining room and worked through comments and edits on every section. They enumerators and Josh left, then Dr. Michelson and I spent another late evening editing the survey. Wednesday we would be field testing the edited survey, with each enumerator and Josh giving the survey twice.

Wednesday was much of the same. We drove to a rural village, Newland, and each enumerator and Josh interviewed two farmers this time. The first day of field testing was no fluke – the surveys were consistently being completed in an hour on average. After saying goodbye to the village extension officer in Newland, we drove back to the hotel for another editing session. We edited a bit, then Dr. Magomba came to help us hash out logistics and village choices. We decided to go to eighteen villages – one per day - and surveying twenty farmers in each village, giving us an upper bound of 360 farmers in our sample. Not a bad sample size for my first project! After planning, Dr. Magomba helped me secure a long-term rate for my time in the Morogoro Hotel. Dr. Michelson would be leaving on Thursday, the next day, so we worked on the survey together one last time.

Thursday rolled around, and I left early with Josh to pick up more fertilizer and get some supplies. We got back to the hotel around noon, and I said goodbye to Dr. Michelson. I was nervous about managing the survey on my own, but Dr. Michelson said she thought I was good at interacting with Josh and the enumerators - that small compliment did much to assuage my concerns. After Dr. Michelson left I grabbed lunch with Josh at his favorite restaurant in Morogoro, the Blue Palm. I had ugali, beans, some healthy vegetables that I ignored because I’m not thathealthy, and a big helping of delicious beef stew. We made copies of each version of the survey after lunch – we switched the order of a few modules in the different versions to help against order effects affecting the responses of the farmers. After the copies we parted ways – Joshua to his home and me to the hotel. I still had work to do – I packaged out 1 kilogram bags of fertilizer, cut soap into sizes (we use soap in place of fertilizer to teach the farmers how to play the auction before repeating with fertilizer), and portioned out TSH to give to the farmers so they could bid. I emailed a bit, then went to bed around 11. Friday would be our first round of data collection!

On Friday we left the hotel at 7:15, bright and early. We stopped for a quick breakfast of goat soup and chapati then headed to Mtengo wa Simba, the first village of data collection! After a few wrong turns we found the village and met with the village executive officer and the village extension officer. We then started surveying farmers. I helped facilitate during and in between surveys – giving winnings from the multiple price lists to the enumerators, making change, replenishing soap and fertilizer, and giving out new surveys. All during this I tried my best to answer any questions the enumerators and Josh would have for me. That’s another thing I am learning – sometimes I won’t know the answer to a question about a particular survey point and will have to think on the spot of the best response. It is very different from anything during the school year at U of I. In between facilitating the survey and answering questions I entered into my laptop the responses to the second day’s field testing surveys. We wrapped up at about 3:30 and headed back to the hotel. We unloaded the car so I could replenish the fertilizer, soap, and TZS, then said goodbye for the day. I worked until 9:30, then went to bed after a long day!

Saturday was much the same as Friday. We left early, grabbed breakfast, then went to the village of Kizinga. The village office was in the middle of rolling maize fields, a relevant setting for the survey. I entered in some of the first day’s surveys and helped the enumerators, and then we finished around 3:30. I met with one of Dr. Michelson’s past field managers, Leakey Lwambo, for two hours to talk about research then finally made it back to my room. I portioned out two village’s worth of TZS and soap, then emailed before heading to bed.

I’m writing this on Sunday. Today I was able to sleep in for a glorious two hours extra! I ate my breakfast then started working again. I have to enter in surveys and portion fertilizer for the coming week. I’ll be heading back to Dar es Salaam on Wednesday to attend a workshop at the IITA offices. There I will connect with more of IITA’s network of project leads and share information about all the cool work that I am doing for Global Food Security.

It’s been a whirlwind so far, and I can only anticipate the pace to continue the same. Field work requires me to constantly be on top of organization and preparedness and always be ready to think on my feet. There’s nothing I can compare it to, and I only look forward to the coming weeks. If you have any questions about my work please feel free to send them my way - my email address is bnorton2@illinois.edu. I might take a day to respond, but I will! Thank you for reading!