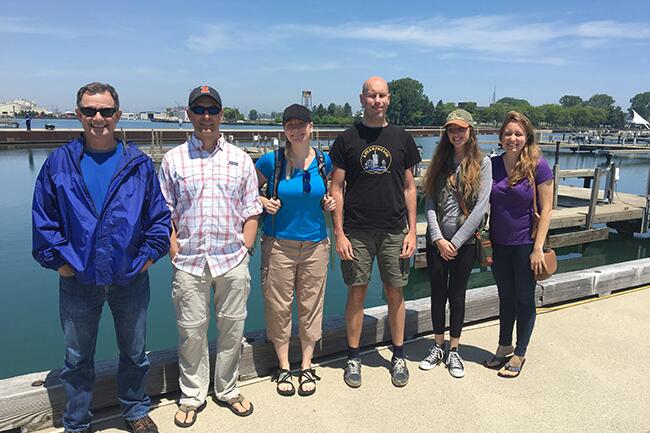 URBANA, Ill. – Many anglers know invasive species cause problems in their favorite fishing spots, but a smaller subset routinely acts to prevent aquatic hitchhikers on boats and other equipment. What sets these anglers apart? A recent study from the University of Illinois attempts to answer that question from a social science perspective.

“Anglers are increasingly aware of this issue, but people continue to engage in behaviors that degrade the environment,” says Carena van Riper, assistant professor in the Department of Natural Resources and Environmental Sciences at U of I and lead author on the Environmental Management study. “We’re trying to figure out what social-psychological and external factors are shaping people’s decisions, and in turn, how those factors can be targeted by fisheries management agencies to change behaviors.”

Human behavior is complex. As one example, we are more likely to do something if we think everyone else is doing it. These so-called “social normative beliefs” have been well documented in the environmental social sciences, and are powerful motivators of behavior around aquatic invasive species. For example, if anglers are dutifully lining up at the boat-cleaning station, you probably will too. But if most people are driving right past, van Riper says, you’re less likely to stop even if you know you should.

Because our responses to social norms are context-dependent, van Riper says they’re unstable and might not be effective for inducing long-term behavior change.

“Less attention has been directed to understanding stable psychological orientations, things like cultural values and environmental worldviews,” she says. “There needs to be more understanding of these processes that are shaped over the course of a person’s life and that influence behavior. If management agencies can tailor messages to align with people’s values, we think they will be more likely to resonate, as opposed to trying to make these quick fixes that ultimately won’t yield a sustainable response.”

The starting point for van Riper was to evaluate the environmental worldviews of anglers; these are stable, long-term measures of the human-nature relationship. Along with her research team, she surveyed 104 visitors to two lakeside recreation areas near Chicago during the summer of 2016. Using a series of questions developed in the Netherlands, the team asked visitors whether they agreed or disagreed with statements like, “I would like to spend a week alone in a forest,” and “I have the obligation to protect nature.”

Survey respondents were also asked questions about their own behaviors and their social-normative beliefs. That is, any specific actions they had taken in the previous year to reduce aquatic invasive species, such as volunteering to improve affected habitat, and whether they thought others had taken the same actions.

Van Riper and her colleagues then analyzed the extent to which environmental worldviews predicted social-normative beliefs, and in turn, how these beliefs predicted personal behaviors.

The researchers found that people who believed others were taking action to control aquatic invasive species were more likely to take action themselves. That result wasn’t surprising. Instead, the novel part of the study was finding that environmental worldviews – these stable, core beliefs about nature – can significantly influence social-normative beliefs related to aquatic invasive species.

The researchers found people with a participant-in-nature worldview, the most nature-centric orientation, were more likely to believe others were taking action to control aquatic invasive species. Conversely, those with the partner-with-nature worldview were less likely to believe others were taking actions to control aquatic invaders. The other two worldviews did not predict normative beliefs or behavior.

“For instance, there were three types of ways people could express environmentally friendly behaviors,” she says. “Social stewardship behaviors were most common. Anglers in this context showed their concern for the environment by interacting with their peers; for example, people reported working with others to minimize impacts on the environment. This is something that management agencies could respond to by encouraging social interaction that fosters environmentalism.

“With a better understanding of worldviews or even cultural values, which is more fundamental, then you can shape messages so that they resonate and are processed by stakeholders. It’s a matter of adopting different terms, language, and framings.”

The study is a first step in a larger project aimed at understanding how angler behaviors are affecting environmental resources across the Great Lakes region, supported by the Great Lakes Fishery Commission.