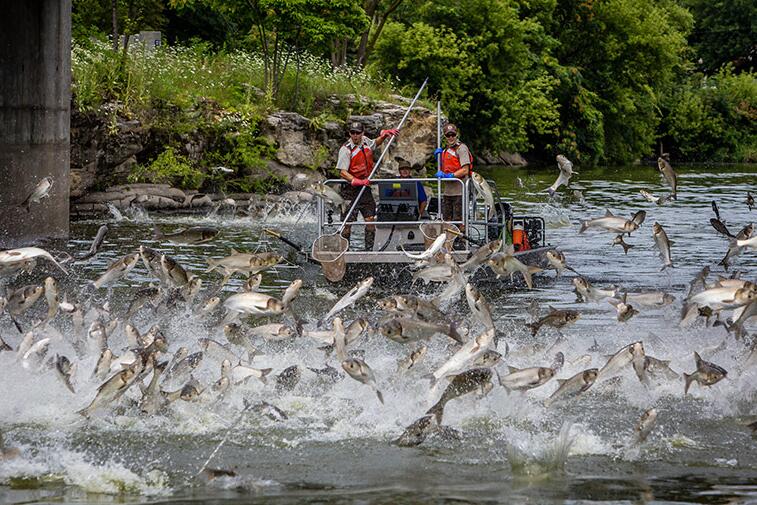 URBANA, Ill. – Invasive silver carp have been moving north toward the Great Lakes since their accidental release in the 1970s. The large filter-feeding fish, which are known to jump from the water and wallop anglers, threaten aquatic food webs as well as the $7 billion Great Lakes fishery. But, for the past decade, the invading front hasn’t moved past Kankakee. A new study, led by scientists at the University of Illinois, suggests that Chicago’s water pollution may be a contributing to this lack of upstream movement.

“It’s a really toxic soup coming down from the Chicago Area Waterway, but a lot of those chemicals go away near Kankakee. They might degrade or settle out, or the Kankakee River might dilute them. We don’t really know what happens, but there’s a stark change in water quality at that point. That’s right where the invading front stops,” says Cory Suski, associate professor in the Department of Natural Resources and Environmental Sciences and co-author of the study. “And this fish never stops for anything.”

The researchers think the fish stall out at Kankakee because they are responding negatively to compounds in the water flowing downstream from Chicago. They formulated their hypothesis after reading a 2017 water quality report from the U.S. Geological Survey. USGS researchers tracked changes in water chemistry in a single pocket of water as it moved from Chicago downstream through the Illinois River. Right near Kankakee, many of the pharmaceuticals, volatile organic compounds, and wastewater indicators dropped off the charts.

Suski says many of these compounds have been shown in other studies to induce avoidance behaviors in fish, but his team didn’t look at behavior. Instead, they examined gene expression patterns in blood and liver samples from silver carp at three locations along the Illinois River: at Kankakee, approximately 10 miles downstream near Morris, and 153 miles downstream near Havana.

“We saw huge differences in gene expression patterns between the Kankakee fish and the two downstream populations,” Suski explains. “Fish near Kankakee were turning on genes associated with clearing out toxins and turning off genes related to DNA repair and protective measures. Basically, their livers are working overtime and detoxifying pathways are extremely active, which seem to be occurring at the cost of their own repair mechanisms. We didn’t see that in either of the downstream populations.”

Suski stresses that his study wasn’t designed to demonstrate a cause-and-effect relationship between water pollution and silver carp movement, but the results hint at a compelling answer to a decade-old mystery. The researchers hope to follow up to show how the fish are metabolizing the pollutants, which will give them a better understanding of which compounds are having the biggest effects. Right now, it’s a black box – the USGS study documented approximately 280 chemicals in the Chicago Area Waterway and downstream sites.

Regardless of which specific pollutants may be responsible for stopping silver carp – if that hypothesis is later proven – the results could have interesting implications for management.

“We’re not saying we should pollute more to keep silver carp out of the Great Lakes. That’s not it,” Suski says. “Right now, things are stable, but that might not always be the case. There’s a lot of work in Chicago to clean up the Chicago Area Waterway. Already, water quality is improving, fish communities are getting healthier. Through the process of improving the water quality, which we should absolutely be doing, there’s a possibility that this chemical barrier could go away. We don’t need to hit the panic button yet, but at least we should be aware.”

The article, “Physiological status of silver carp (Hypophthalmichthys molitrix) in the Illinois River: An assessment of fish at the leading edge of the invasion front,” is published in Comparative Biochemistry and Physiology Part D: Genomics and Proteomics [DOI: 10.1016/j.cbd.2019.100614]. Authors include Jennifer D. Jeffrey, Ken Jeffries, and Cory Suski. Suski and Jeffrey are affiliated with the Department of Natural Resources and Environmental Sciences in the College of Agricultural, Consumer and Environmental Sciences at the University of Illinois. Jeffries is in the Department of Biology at the University of Manitoba.

The research was supported by funds from the US Environmental Protection Agency, administered by the Illinois Department of Natural Resources.