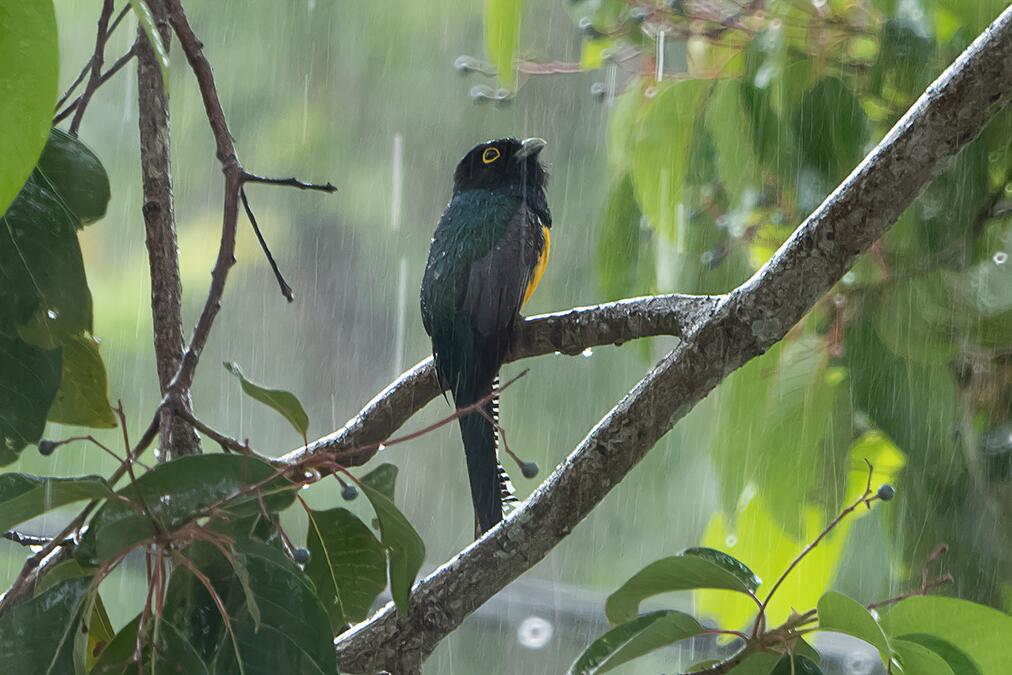 URBANA, Ill. – Imagine a tropical forest and you might conjure up tall trees hung with vines, brightly colored birds, howling monkeys, and … rain. Indeed, precipitation patterns, along with temperature, dictate where tropical forests are distributed around the world, but surprisingly, scientists know very little about the direct effects of rainfall on animals.

A new conceptual framework, developed by University of Illinois and Kansas State University researchers, calls for the scientific community to formally consider the role of precipitation in an organism’s ecological niche – the set of biological and environmental factors that optimize life for a given critter.

“We understand exactly how most animals respond to temperature, but the same is not true for rain,” says Alice Boyle, associate professor in the Division of Biology at Kansas State and lead author on the Trends in Ecology & Evolution article. “When animal biologists see rainfall effects in their studies, they assume it must be about how plants are responding to rainfall and how that affects the food supply for the organisms they’re studying. But there can be direct physiological consequences of rain related to feeding behavior, predation, pathogens, and more. There's a lot more going on than food supply.”

In the article, Boyle and co-authors Elsie Shogren and Jeff Brawn propose and define what they call the hygric niche: the collection of physiological, behavioral, and ecological processes and interactions predicting how endothermic, or warm-blooded, organisms perform under a given precipitation scenario.

“Prior to this, there was no unifying conceptual framework to understand why responses to precipitation might differ between species or even within the same species, depending on the location of the study,” Boyle says. “We’ve heard from scientists who have said, ‘Wow, how come I’ve never thought about this before?’ I think this new framework is probably going to change the way many people study the distributions, physiology, and demographic responses of endotherms.”

Brawn, professor in the Department of Natural Resources and Environmental Sciences at Illinois, adds, “This concept has implications for conservation of sensitive organisms, long term. In terms of planning where to invest conservation dollars or where to prioritize habitat, we should be looking at rainfall refugia where precipitation regimes are likely to stay intact over time.”

Because the effects of temperature and moisture are so difficult to disentangle, the team developed the concept of the hygric niche using decades of bird and mammal research from the tropics. Temperature in these equatorial landscapes varies little on an annual basis, but rainfall can vary widely, with some locations experiencing distinct dry and wet seasons and others experiencing daily precipitation throughout the year. But unfortunately, in many tropical locations, these millennia-old patterns are now shifting due to climate and land use change.

“Human-caused changes to climate are resulting in some areas getting wetter, and other areas getting drier. Also, it is not just the amount of precipitation that is changing; the timing and magnitude of storms are also changing, and we have very little idea of how any of this will affect animals,” according to the authors.

In their article, Brawn and Boyle describe ways in which precipitation (too little or too much) can affect organisms at the individual, population, and community levels. While rain clearly affects food supply, it also can affect foraging behavior, reproductive and population growth rates, and competitive interactions in subtle ways that might be difficult for researchers to trace back to any particular source. And even small shifts in tropical rainfall patterns could have large effects.

“Even if you can see intact forest out to the horizon, if the precipitation regimes change, the integrity of that ecosystem may be compromised. And that's concerning,” Brawn says.

Although the concept was conceived with tropical systems in mind, the researchers suggest it can and should be applied to ecosystems and organisms outside the tropics, with a bit of tweaking and further study.

“I work in both tropical and grassland systems and my major focus of research in grassland birds, one of the most threatened group of birds in North America, is understanding how temporal variation in precipitation affects those populations. So the questions and the concepts are broadly applicable,” Boyle says. “It's just that it was more tractable to lay them out and argue for their importance in tropical systems.”

Laying out a new ecological concept requires lots of testing by the research community to identify its limitations, and that’s just what Boyle and Brawn hope will happen.

“The next steps involve the research community testing key assumptions and predictions of our model,” they say. “One of the hardest but most important tasks is to understand whether rainfall affects different animal species for the same or different reasons. Is it really mostly about food, or are these less-obvious physiological costs more important than we thought? Answering these questions will be crucial to doing effective conservation and climate change mitigation in the tropics.”