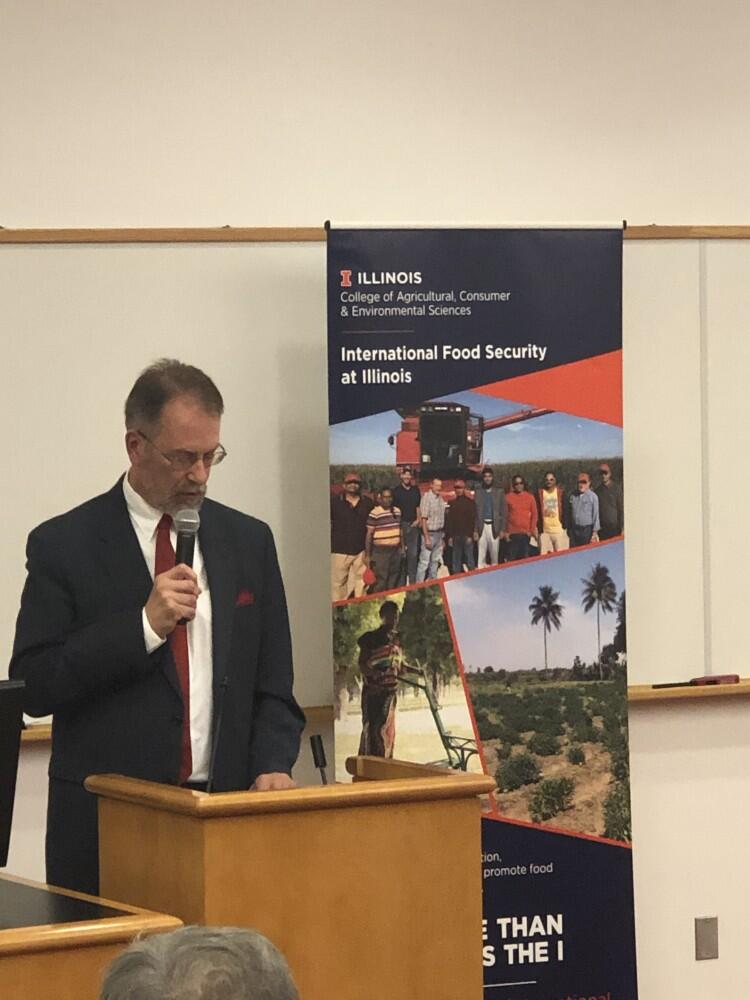 Allan Mustard was sworn in as U.S. Ambassador to Turkmenistan in late 2014 and continued in this post until his retirement in June 2019. A widely recognized authority on agricultural and food policy, Mustard has broad experience assisting in the process of economic reform throughout Eastern Europe and the former Soviet Union. He has promoted U.S. agricultural exports for over three decades in the Foreign Agriculture Service (FAS), a unit within the United States Department of Agriculture (USDA), and spent 19 years abroad serving as an agricultural attache, counselor, and minister-counselor, before becoming ambassador.

From his perspective based on nearly 38 years as a public servant and as an FAS historian, Mustard sharply criticized current U.S. trade policies.

Mustard began his talk titled “Smoot-Hawley Redux? Who's Hurting Now?" with a familiar warning: “Those who do not study history are doomed to repeat it.”

As Mustard’s lecture title referenced, in 1930, President Hoover signed the Smoot-Hawley Tariff Act despite warnings from 1,000 economists. This law implemented protectionist trade policies in the U. S. and contributed significantly to the Great Depression.

“Everyone in this room knows what Smoot-Hawley did; it took a bad economic downturn that started with the stock market crash in 1929 and made it worse. U.S. tariffs rose from the previous average of 40% ad valorem to 60% ad valorem, and our trading partners retaliated with similar measures. Economists agree this contributed to the Great Depression,” Mustard said.

In 1934, U.S. Congress passed legislation that repealed the Smoot-Hawley Tariff Act of 1930. This legislation also delegated to the president the authority to set tariffs via reciprocal negotiations with foreign trading partners through consultation with the FAS, which would lead the negotiation of the agricultural import tariffs. Thus, by 1939, 16 countries had agreements in place for reduced agricultural tariffs.

More liberal trade proved beneficial to U.S. agriculture. Still the U.S. government sought to support farm incomes by purchasing agricultural commodities and thereby ensuring prices would be favorable to growers. As stockpiles accumulated, Congress allowed the FAS to directly promote U.S agricultural exports to foreign markets and authorized export sales for local currency, rather than U.S. dollars. This was, in part, based on testimony from FAS that the USDA had over $3 billion tied up in surplus commodities and nowhere to sell them.

“The intent was clear, to shift away from subsidized government sales of surplus commodities toward commercial sales abroad. It took about 30 years, but by 1986, when I went overseas to Moscow for FAS, the U.S. export sales of grain to the USSR were wholly in private hands, at least on our [U.S.] side of the Atlantic,” Mustard remembered.

According to Mustard, the trend towards greater commercial exports of agricultural products may have peaked in 1994, when 60 years of trade negotiations came to fruition in the ratification of the World Trade Organization (WTO) agreements.

“The WTO was groundbreaking. U.S. farm support appeared to be on track to rely on commercial sales, not handouts, with safety nets in place to protect producers from catastrophes. And after 1994, for the next two decades U.S. farm exports exploded. China emerged as our largest customer,” Mustard noted.

The growth in agricultural trade that proved tremendously beneficial for U.S. farmers has now been reversed by U.S. government policy. The outcomes, according to Mustard, are lamentable.

“Contrary to what some might think, speaking as someone who was in the trade policy trenches for over 30 years, trade wars are not easy to win,” Mustard said.

Mustard recounted that the current U.S. administration started a trade war to rescue the steel industry. The Chinese then imposed retaliatory tariffs on 800 agricultural products accounting for 99% of U.S. agricultural exports to that country. He noted the hit to Illinois commodities: the tariff on soybeans went from 3% to 28%, on sorghum from 2% to 27%, and on hams from 20% to 70%.

The outcomes have hurt both steel and agricultural industries, as he detailed with several statistics and analyses from USDA. He also noted that since tariffs on steel have been imposed, U.S. steel mills have begun to close and even file for bankruptcy.

Mustard argued that the strategic consequences of undermining the WTO, trade liberalization, and six decades of work between 1934 and 1994 include: 1) the U.S. faces a return to a previous era of undisciplined subsidies, unfair competition, and greater market uncertainty; 2) the U.S. is driving our best customers into the arms of our competitors and reducing market efficiency, and therefore both profits and income; and 3) The U.S. is jacking up subsidies in a period of record budget deficits.

“We started trade wars with our best trading partners and are providing direct payments to farmers and purchasing surplus commodities. So farmers are receiving government handouts again, something we decided to move away from 25 years ago,” Mustard noted.

Mustard argued that U.S. agriculture and the U.S. economy are best served when people can make money by selling products to people who want to buy them. Trade wars restrict that process, as do arbitrary direct subsidies, bailouts, and special deals. Mustard raised concerns about the current administration’s aggressive interventions in international trade and its retreat from support of gathering evidence and information to support American agriculture through “gutting staff in the Economic Research Service (ERS) and the National Institute for Food and Agriculture.”

Mustard asked, “Why should you care about the fact that ERS has lost 80% of its staff and will have to rebuild almost from scratch? Reports are stalled, including reports on the impact of trade policy on American agriculture and farm income, the impact of food stamps, consolidation of dairy farming, drivers of the opioid epidemic, and obesity.”

“These and other reports are used by policy makers, farmers, agribusiness people, and policy advocates to formulate decisions based on the best information and best analysis available. They will now lack much of the unbiased, science-based analysis upon which they have relied since Calvin Coolidge's Agriculture Secretary, Henry Cantwell Wallace, and Professor Henry Charles Taylor created the Bureau of Agricultural Economics in 1922.”

Mustard closed his informative and passionate lecture by encouraging the audience members to exercise their civil rights in ways that can strengthen our democracy and positively influence political and policy outcomes.

Read his speech in its entirety here.

Mustard earned an M.S. in agricultural economics from the University of Illinois in 1982. He is the recipient of five Presidential Rank Awards; USDA's highest award, the Distinguished Service Honor Award; USDA's second-highest award, the Superior Honor Award (twice); the Grand Golden Medal of Merit of the Republic of Austria, the highest award Austria can give to a foreigner; and numerous other Department of State and USDA performance awards.