Methionine could be key to improving pregnancy rate in dairy cattle 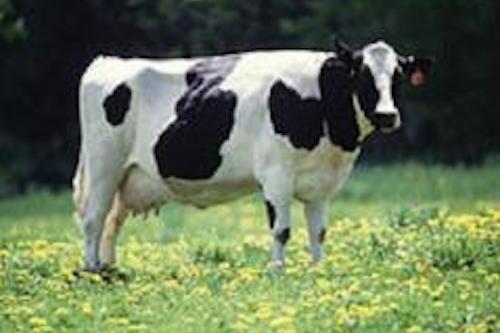 URBANA, Ill - Research at the University of Illinois has shown that adding methionine to the diets of Holstein cows during the prepartum and postpartum periods may impact the preimplantation embryo in a way that enhances its capacity for survival.

“Methionine is the first limiting amino acid for dairy cattle,” says U of I animal scientist Phil Cardoso. “We know that the lack of methionine limits cows in producing protein in the milk. Now we’re beginning to understand that it affects more than just the milk protein. We want to learn more about the biological effect it has on the cow, and in this case, on the embryo.”

Because cows cannot produce methionine, it needs to come from the diet. “But anything I feed to a cow is first going to come in contact with, and be digested by, the bacteria in the rumen,” Cardoso explains. “If I give crystal methionine to a ruminant animal, it gets used up by the bacteria. So we supplement the diet with rumen-protected methionine (RPM), and 85 percent of that is absorbed in the duodenum and goes into the blood stream. Fifteen percent still gets used by the bacteria, but now the cow has methionine.”

In the study, researchers began supplementing the diets of one group of cows 21 days before they gave birth and continued the supplement through 72 days after birth. The control group did not receive methionine. “Sixty days after the cows gave birth, we artificially inseminated them,” says Cardoso. “In the first group, the oocytes that came into contact with the semen came from an environment with higher blood methionine concentration than the second [control] group. Approximately seven days later, we harvested the preimplantation embryos of both groups.”

The team at Illinois then sent half of the embryos to their colleagues at the University of Florida. Their analysis showed that the preimplantation embryos from cows that were fed methionine had more lipid droplets inside the embryo. Lipids are molecules that contain hydrocarbons and make up the building blocks of the structure and function of living cells. Examples of lipids include fats, oils, waxes, certain vitamins, hormones, and most of the non-protein membrane of cells.

“It gets interesting when we attach our findings to other research,” Cardoso says. “A study done at the University of Wisconsin showed that cows, treated or untreated, became pregnant at the same rate, but in the cows treated with methionine, embryonic death was much lower. In untreated cows, embryonic death was around 19 percent, but in treated cows, it dropped to around 6 percent. We think the methionine is allowing the embryo to have more lipids which can be used as energy to help them survive more stress.” Cardoso says the research also showed that the embryos of the treated cows were larger, which could also be a result of lipids used as energy.

The team at Illinois now hopes to study the remaining embryos to try to determine why the treated embryos have more lipid droplets. “What are the processes that may be changing in that embryo that allows it to have more fat? Gene expression analysis will allow us to go more in depth on why this is happening.”

This research has been funded in part by Adisseo NACA, in Alpharetta, Georgia, and the USDA National Institute of Food and Agriculture (Washington, DC; W-2112). The study, “Effects of rumen-protected methionine and choline supplementation on the preimplantation embryo in Holstein cows,” has been published in the June issue of Theriogenology and can be found at http://bit.ly/methionine.