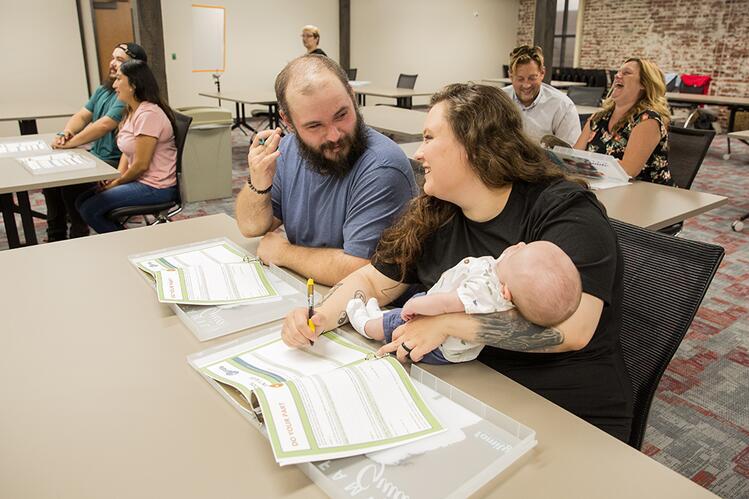 URBANA, Ill. – The birth of a child is a major life transition, and it can be a stressful time for new parents. Family and relationship education programs are available to help individuals and couples deal with these challenges. But do such programs work as intended?

A new study from the University of Illinois evaluated Family Expectations, a federally-funded parenting and couple enrichment program for expectant parents. The researchers found significant improvements in participants’ mental health, couple functioning, and parenting skills after completing the program.

“In the last 20 years or so, there's been significant federal funding towards couple and relationship education. We wanted to learn if such programs are effective, in order to ensure we are making good use of the time and resources that are being devoted to them,” says Allen Barton, assistant professor in the Department of Human Development and Family Studies at U of I and lead author on the paper.

Family Expectations is a program for new and expectant parents based in Oklahoma City, funded through the Administration for Children and Families under the U.S. Department of Health and Human Services. Program participants meet once a week for 12 weeks, starting in their second or third trimester of pregnancy.

“Family Expectations has had a large reach in terms of number of couples participating, but it is also important to evaluate impact, or change, in program participants,” Barton says.

“It is a holistic, multifaceted program that includes content about birth, caring for a newborn, parenting together, stress management, and how to strengthen the couple relationship–all important areas for families to navigate during this time.”

The study included 339 couples who were enrolled in Family Expectations between 2017 and 2019. Most were first-time parents, while 29% already had another child. The researchers conducted surveys with respondents before they started the program, at its conclusion, and 12 months later.

“We found positive effects across the board,” Barton states. “Participants at the end of the program report lower psychological distress, better mental health, and improved couple functioning. For parenting outcomes, we see improvement particularly for those who were already parents. They had lower levels of harsh parenting, as well as higher levels of co-parenting satisfaction, or sense of working together as a team.”

After a year, changes appearing immediately after the program were associated with continued benefits, including lower psychological distress, better couple functioning, and improved parenting skills in individuals.

“These are people who are going through a major transition. If you can make changes in how they approach this time so they are less anxious and nervous, that’s going to have long-term benefits for their mental health, as well as for the couple relationship, as our results show.”

The researchers cannot conclude with certainty that the program directly caused the improvements, as no data were collected from a control group at the end of the program for comparison. But Barton points out the birth of a child is generally a difficult time where people rarely get better in these areas on their own.

“Typically, life is more stressful with the birth of a new baby. But we're seeing that individuals who went through this program are actually reporting less psychological distress. Given that, it’s unlikely these are just natural changes happening during this time period. Our findings suggest the program is successful in helping individuals and families,” he says.

The research comprised an ethnically diverse sample, including 55% white, 28% Black/African American, 12% Native American, 3% Asian, and 1% other. Twenty percent identified as Hispanic/Latino/a. Most were low-income couples, with a median combined income under $15,000.

Less than half (39%) of couples were married but 91% were cohabitating. The researchers found few differences in results for married versus unmarried couples, though married couples seemed to benefit slightly more from the program in areas where differences were observed. Barton says this may be because these couples have already made a public commitment to the relationship; therefore, devoting attention to strengthening the relationship is consistent with the commitment and desire.

He notes these types of education programs must continue to adapt as family patterns evolve.

“We know that stable, healthy families matter for adults, for kids, and for communities. But there's an increasing amount of complexity in families today. Family scholars and practitioners need to think about the fluidity in relationship formation,” he says. “How can we take this complexity into account and create programming that will be effective for individuals across the spectrum of relationship statuses and types?”

The Department of Human Development and Family Studies is in the College of Agricultural, Consumer and Environmental Sciences at the University of Illinois.

Funding for this research was provided by the Office of Family Assistance within the Administration for Children and Families, U. S. Department of Health & Human Services.