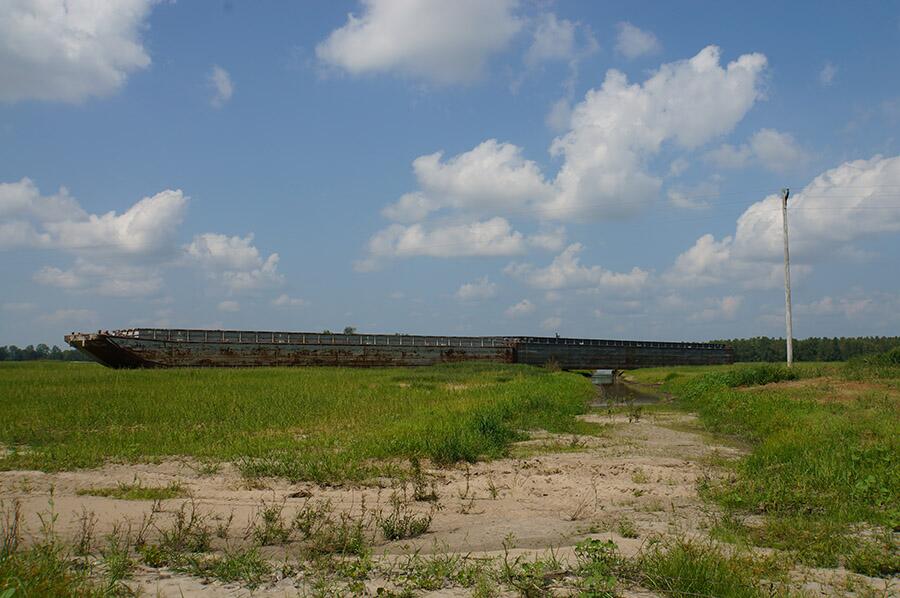 URBANA, Ill. – Alexander County sits near the confluence of the Mississippi and Ohio Rivers, at the southernmost tip of Illinois. The sparsely populated jurisdiction is perhaps best known for devastating floods resulting from repeated failures of the Len Small levee in 1993, 2011, and 2016. Homes and businesses have been severely damaged, residents stranded, and rich agricultural land irreversibly degraded by sand deposition and erosion.

Despite the severity of past flooding, the levee has been left unrepaired since 2016, leaving the area to flood every year since. Residents, land owners, county officials, and area lawmakers are clamoring for the U.S. Army Corps of Engineers to repair the breached levee. However, a new study led by a University of Illinois soil scientist predicts the levee will continue to fail even if repaired, and more extensive intervention is needed to prevent future flooding.

“Because the levee is built on unconsolidated ancient Ohio River valley alluvial sediments, which are easily eroded by the Mississippi River, any patch or repair will only be a short-term solution. The levee is very likely to fail again during a future major flooding event,” says Kenneth Olson, professor emeritus in the Department of Natural Resources and Environmental Sciences at U of I.

In the study, Olson and co-author David Speidel, retired resource conservationist with the USDA Natural Resources Conservation Service, recount the re-alignment of the ancient and modern Mississippi River during the last 15,000 years.

Prior to the 1880s, the Mississippi River had multiple “relief valves” in the region. That is, when the river reached flood stage, excess water would naturally overtop river banks and flow into lowland areas like the Big Swamp, southwest of Cape Girardeau, Missouri. Olson and Speidel say shifting land use priorities, such as creating agricultural land by draining wetlands, spurred construction projects that dramatically changed the behavior of the river.

“Between 1880 and 1943, a diversion channel, embankment, and four levees were built in the area. They were designed to capture upland runoff, protect agricultural lands, and channel the river,” Olson says. “But the levees cut off water storage areas that acted as relief valves at flood stage and significantly narrowed the river south of the Thebes Gap, increasing the volume, velocity, and water depth in the Mississippi River’s main channel.”

As the Mississippi River snakes around Dogtooth Bend at the southern tip of Illinois, certain curved segments of the riverbank take the brunt of the river’s erosive power. One of those spots, a section of the Len Small levee near Miller City, first failed in 1993. The breach was repaired that year, but the levee breached again in 2011 and 2016. In 2011, farmers patched it themselves, but the 2016 breach was too extensive for a do-it-yourself repair. The cost to fix it was an estimated $16 million, including a required $3-million local match. Without funds to make the necessary repairs, floodwaters now cross the Dogtooth Bend peninsula between river mile markers 33 and 15 every year.

Speidel says, “In the event a solution is not found and acted on to correct the 2016 levee breach, the agricultural land and roads on Dogtooth Bend peninsula will continue to degrade and the channel will continue to extend across the peninsula with each subsequent flooding event.”

Navigation in the region has been impacted, as well. When floodwaters crossed the peninsula in 2019, six barges and multiple shipping lane markers got caught in the bypass flow. Eventually, the barges crossed the Miller City road, took out power lines, and finally came to rest on a farmer’s irrigation system. Only four of the six barges could be removed before the floodwaters receded.

According to Olson, Dogtooth Bend farmers have been unable to produce crops during the last four growing seasons, and some have already sold their farm equipment. He says, “It is impossible for farmers to pay their farmland assessment tax bill without producing any crops. This degraded land needs an updated soil survey to assess the extent of soil damages, and degraded agricultural lands should now be taxed at a lower rate as either ‘other land’ or as ‘conservation land.’

“As the frequency of intense precipitation events increase, the Illinois and Missouri levee systems are likely to fail repeatedly if maintained at their previous or current height, location, and strength. The current Army Corps solution – temporarily blocking the erosion with large rocks to prevent the navigation channel from moving – is not working in the Dogtooth Bend area,” he adds. In fact, flooding has already started in 2020.

Olson and Speidel outline an alternate plan that acknowledges the current realities of the river, which seems determined to cut across the Dogtooth Bend peninsula. “Combinations of land use changes, a floodway bypass, expanded floodwater storage in the confluence area, and river training structures such as weirs, wing dikes, and step dikes are needed to address the flooding and maintain the existing Mississippi River shipping channel,” Olson says.

More specifically, the plan calls for a wholesale shift in land use in the Dogtooth Bend peninsula area, from agriculture to wetlands, forest, wildlife habitat, and floodwater storage. “The current land owners will need to be compensated for any land use change,” Olson asserts.

In addition, Olson and Speidel propose a new combined levee and causeway to keep the Miller City-to-Olive Branch road passable during flooding. They suggest the project could be funded from local and state highway funds in partnership with the Mississippi River Commission and the U.S. Army Corps of Engineers. The elevated causeway would further protect farmsteads and farmland that have not yet been degraded by past flooding events. Conservation easements are also being proposed for the degraded lands already affected by past flooding events.

The article, “Why does the repaired Len Small levee, Alexander County, Illinois, U.S. continue to breach during major flooding events?” is published in the Open Journal of Soil Science [DOI:  10.4236/ojss.2020.101002]. The research was supported by USDA, NIFA, Water Division, the Department of Natural Resources and Environmental Sciences, and the College of Agricultural, Consumer and Environmental Sciences at Illinois.