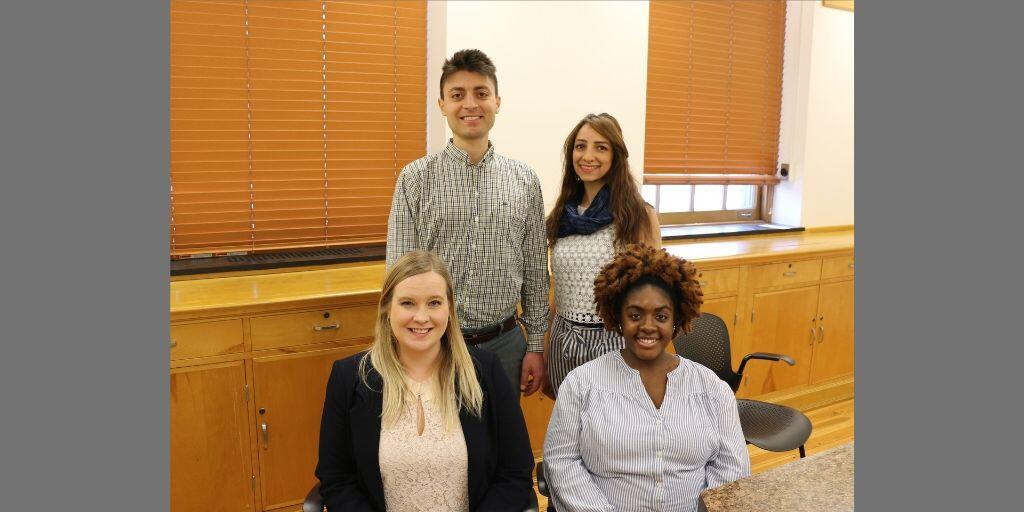 URBANA, Ill. – Interest in nutrition and diet choices that could prevent the development of cancer is not new. With recent diet trends, the question of carbohydrate nutrition and cancer risk has been of special interest.

While there is evidence of nutrition’s role in decreasing risk of developing certain kinds of cancers, research in the area of what cancer patients should eat in the period after diagnosis to improve their prognosis is limited, especially in regards to carbohydrate nutrition.

Anna Arthur, assistant professor in food science and human nutrition at University of Illinois, and her lab have been particularly interested in the role of carbohydrates in the progression and prognosis of head and neck cancers. In a paper published last year, Arthur and colleagues found that high-carbohydrate consumption in patients, assessed prior to starting treatment for head and neck cancer, was associated with increased mortality rates in those patients.

“There is great interest in the role of carbohydrates in cancer development as well as progression, both among the scientific community and among the general public, and especially with patients who have been diagnosed with or have a higher risk of cancer,” Arthur says.

A new study from Arthur’s lab, published in Current Nutrition Reports, finds that while research supports the positive role of fiber intake in decreasing risk for colorectal cancer, there is not yet enough clinical evidence to make specific diet recommendations regarding carbohydrate intake for cancer patients.

The findings are helping Arthur and her lab design and pilot clinical studies to better understand the role of carbohydrate nutrition in cancer progression and prognosis.

For the study, Arthur and researchers in her lab reviewed studies looking at fiber intake and complex carbohydrates, including whole grains and cereal sources, and associations with primary prevention for various types of cancers. They also included studies on relationships between consumption of simple sugars and foods high on the glycemic index, and risk of cancer.

“We looked at both primary prevention, which is reducing the risk of incidence, and after cancer diagnosis, and whether there’s an association with mortality,” explains Christian Maino Vieytes, a doctoral candidate in Arthur’s lab and a co-author of the study. “We focused primarily on the most common types of cancers, especially in western and industrialized countries, like colorectal, prostate, breast, and head and neck cancers.”

Although they also looked at studies on mortality after cancer diagnosis, those studies were fairly low in terms of quantity and volume, Maino Vietyes says. While a number of cell and animal studies have provided plausible evidence of the mechanisms by which carbohydrates may impact cancer risk, the researchers say studies that show this actually happening in populations of cancer patients are limited.

In the paper, the researchers provide a “map” demonstrating the multi-faceted nature in which pathways in the body are modulated by carbohydrate intake, according to previous research studies. For example, simple carbohydrates may increase risk by activating insulin-like growth factors (insulin/IGF-1), which could promote the growth of cancer cells. At the same time, complex carbohydrates can reduce risk by disrupting the pathway of insulin-like growth factors. The link between carbohydrate consumption, obesity, and cancer risk is also discussed.

Despite the mechanistic evidence, Arthur says clinical studies have come up with mixed results and can be difficult to conduct in cancer patients.

“With these early mechanistic studies in cell lines and animal models, while the mechanisms are biologically plausible, it’s so difficult to look at these associations or the effect of these different types of carbohydrates in humans,” she says. “A lot of the studies vary in terms of the populations they enrolled, length of time they followed the participants, the way they looked at carbohydrate consumption, or the different types of carbohydrates. When there’s such heterogeneity between studies and the design of the studies, it makes it very difficult to draw comparisons and conclusions.”

Additionally, asking cancer patients, while they are going through treatment, to enroll in a behavioral intervention trial where they must change their food intake or physical activity is challenging because they are often already overwhelmed, fatigued, and feeling ill, Arthur explains. “Some patients, especially in the case of head and neck cancers, may struggle with trouble swallowing, dry mouth, taste changes, or pain and burning from ulceration in mucosal membranes in the mouth and throat due to damage from free radicals during the radiation process.”

While the breadth and strength of the evidence in the study was most convincing for associations between fiber and complex carbohydrate consumption with colorectal cancer risk, Arthur says a similar association is suggested in other cancer types. Consistent with the findings of this review, the World Cancer Research Fund/American Institute for Cancer Research (WCRF/AICR) now recognizes dietary fiber as a probable protective agent against colorectal carcinogenesis.

Taking these challenges into consideration, Arthur’s lab will continue to focus its research on the areas with the most limited amount of evidence, which is after diagnosis.

“The research looking at carbohydrate nutrition and cancer survival is very limited and we don’t have enough to make recommendations at this point. When patients come to me and ask if they should be eating sugar, or if they should be following a low-carbohydrate diet, even though we have published a head and neck cancer and total carbohydrate paper, I still tell them that the jury is really still out on that.

“The most important thing for any cancer patient going through treatment is to get adequate calories and protein and maintain their weight, because if they become malnourished, that’s going to have greater consequences for cancer outcomes than consuming some carbohydrates during treatment as far as we know right now,” she adds.

A follow-up study Arthur’s lab is currently working on is a randomized control trial to look at the feasibility of a carbohydrate-restricted, high-fat diet in head and neck cancer patients and to assess secondary outcomes such as tumor progression, quality of life, and body composition.

The study, “Carbohydrate nutrition and the risk of cancer,” is published in the journal Current Nutrition Reports. Co-authors include Christian A. Maino Vieytes, Hania M. Taha, Amirah A Burton-Obanla, Katherine G. Douglas, and Anna E. Arthur, all in the College of Agricultural, Consumer and Environmental Sciences at U of I.

Funding was provided in part by a USDA National Institute of Food and Agriculture, Hatch project 1011487, as well as the support from the Division of Nutritional Sciences at U of I.