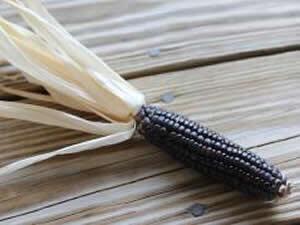 URBANA, Ill. – You may not find it on the list of typical “superfoods,” but bioactive compounds found in the pigment of purple corn are showing potential to prevent or improve complications related to Type 2 diabetes.

Purple corn is most often grown and used as the main ingredient in snack foods like colored-corn chips. But anthocyanins found in the outer layer of the kernel of purple corn—in the pigment that gives the corn its deep color—also have shown the ability to fight against chronic diseases, including Type 2 diabetes. How these compounds are able to aid in diabetes prevention has not fully been understood by scientists.

A recent study from researchers at the University of Illinois reports that in a cell study, anthocyanins in the pigment in purple corn activated novel biological markers related to enhanced insulin secretion and glucose uptake. When activated, these markers can improve health complications caused by Type 2 diabetes. The study is published in Plos One.

“There is a huge concern about the number of people dying from consequences of Type 2 diabetes,” explains Elvira de Mejia, professor in the Department of Food Science and Human Nutrition at U of I, and co-author of the study. “We have been studying several bioactive compounds, trying to understand the mechanism of action and how the diet can decrease or prevent a pre-diabetic situation developing into a diabetic physiological problem.”

Previously, de Mejia studied anthocyanins in other materials like berries and black beans, before working with the commercially available purple corn, also called Maize Morado. After preliminary studies of purple corn, she and her team determined that the pigment was most concentrated in the outer layer of the corn kernel, the pericarp.

“When we look at the pigment in purple corn we find phenolic compounds, in particular anthocyanins, which are part of the pigment family—the ones that gives the reds, blues, and purples to fruits and vegetables. Anthocyanins importantly have been shown in human studies to aid the daily diet in decreasing various chronic diseases. In particular there have been studies with Type 2 diabetes,” she adds.

Before studying the compounds in the pigment, the researchers first needed to determine how to best extract the pigment from the corn pericarp. They found a method that is both clean and inexpensive.

“We concluded that pressure-assisted water extraction was the most appropriate method because you are not bringing in any potential external contaminants or using other kinds of solvents,” de Mejia says. “The pericarp is already a co-product of the corn processing industry. We are not going to change the methodology used in the extraction of this co-product, it’s being produced anyways.”

The researchers then wanted to find out exactly how the compounds found in the pigment are affecting insulin and glucose activity. The team started by looking at the bioactive compounds from biochemical assays, and then moved on to cell cultures.

Diego A. Luna-Vital, a post-doctoral researcher in de Mejia’s lab, explains that they looked at two novel biomarkers to determine if the anthocyanins would influence them. These included the free fatty acid receptor (FFAR1), and glucokinase.

“This free fatty acid receptor is located mainly in pancreatic cells and interacts with the fat—the free fatty acids that are circulating in our blood after a meal. The activation of this receptor (FFAR1) concludes in the secretion of insulin. This is the importance of this receptor. If we activate it, it can act as an alternative to secrete insulin in people who are diabetic and cannot utilize glucose as a sensor for secreting insulin on their own,” Luna-Vital explains.

They observed in pancreatic cells an increase in glucose-stimulated insulin secretion that mimicked a situation after a person eats a certain food and insulin is secreted. To see if it was because of the activation of these receptors or not, they added an inhibitor of this receptor, and then added the compounds.

The enzyme glucokinase is the master regulator of glucose and carbohydrate metabolism in the liver. “So to reduce blood sugar levels, we need to promote the activation of this enzyme, which will, in turn, promote glucose uptake. And if that happens, there is less sugar circulating in the blood,” he adds.

Big picture, they found that the phenolics present in the water-extracted pigment activated both FFAR1 and glucokinase.

In a liver cell culture, they also observed an activation of the glucokinase. “Compared to a physiological state after a meal, this extract can increase the activation of glucose metabolism and glucose uptake by the liver cells,” Luna-Vital explains.

This effect has been further confirmed in an ongoing in vivo study where mice fed a high-fat diet had lower blood glucose levels when they were given the colored corn pericarp extract, compared to the mice with no extract. The mechanisms of action are still under investigation.

Though studies to develop drugs that enhance these same markers are underway, de Mejia cautions that drugs can bring adverse effects. “If you look at the list of drugs that have been used for Type 2 diabetes using different pathways, it’s just amazing. But when you pay attention, in detail, to the adverse effects that each one of these drugs brings, we ask if there are any dietary compounds, substances, or functional foods we can use, maybe on a daily basis, that are not toxic.

“In this case we know these anthocyanins have never shown toxicity—so that was the question here: Is there any way we could affect these two markers through diet and not through drugs?”

The current study stems from work de Mejia and colleagues did studying pigments in varieties of corn that could be used as natural food colorants.

“We concluded that being here in Illinois, corn is a very good venue to do that. So we started working with corn. From there, we studied stability of the pigments, methods of extraction, yield, what kinds of pigments are available, and then we went more into the potential biological activities of these pigments. So what we do in this study was to use water extraction of the most concentrated part of pigments in the corn pericarp.”

De Mejia and colleagues, including Jack Juvik in the Department of Crop Sciences at U of I will continue to evaluate the chemical composition of the pigments, as well as agronomic aspects of colored corn to better understand the relationship between the chemistry, yield, and many other agronomic parameters they are measuring with potential health benefits.

The paper, “Anthocyanins from purple corn activate free fatty acid-receptor 1 and glucokinase enhancing in vitro insulin secretion and hepatic glucose uptake,” is published in Plos One [https://doi.org/10.1371/journal.pone.0200449.g010]. Co-authors include: Diego A. Luna-Vital and Elvira Gonzalez de Mejia, both in the College of Agricultural, Consumer and Environmental Sciences (ACES) at the University of Illinois. De Mejia is also director of the Division of Nutritional Sciences in the College of ACES at U of I.

Funding was provided the National Institute of Food and Agriculture, HATCH 703-6099-1010.