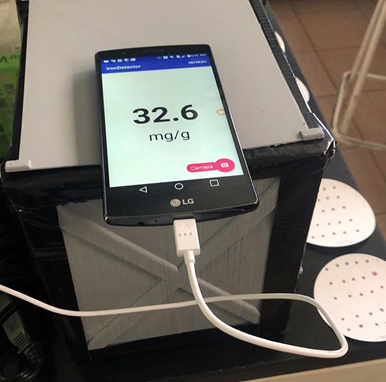 URBANA, Ill. – Many low-income countries have turned to mass food fortification programs to address nutrient deficiencies in their populations. But many of these programs lack the resources needed to determine if the appropriate amount of nutrients is consistently present in those food products.

A team of University of Illinois researchers has developed an affordable, reliable paper-based sensor that works with a cellphone app – also developed at U of I – to detect levels of iron in fortified food products.

The new technology combines chemistry, engineering, nutrition, and food science to develop the color-changing paper sensor that can detect iron in food, along with information technology to develop the easy-to-use cellphone app that is accessible in low-income settings.

Anna Waller, a doctoral candidate in the Department of Food Science and Human Nutrition, and the IGNITE Lab, led the study, which is published in the journal Nutrients.

“We study fortification programs as a means of reducing micronutrient deficiencies in low-income countries,” Waller explains. “One of the calls-to-action for improving the efficacy or success of these programs is ramping up the monitoring and evaluation of these programs, which is lacking in a lot of low-income settings. But to do so involves so much laboratory infrastructure and personnel that often is not available in these settings.”

Juan Andrade, an associate professor of nutrition in the department and co-author of the study, explains that trust between consumers, the companies who process the food products, and the governments who regulate the fortification programs is key. The new technology, he says, addresses that trust.

“At the end of the day you have a tool that everybody agrees upon, that is valid, simple, and low-cost, that gives you results on a cellphone. If the phone can connect to the cloud, and the cloud is connected to a government office or the company’s office, they can monitor and maintain the records that support their claims. Everything is collected and stored. There is no room for disagreement. That is why this is a great technology to bring about.”

Waller began by looking at different types of biosensors. “The paper-based sensor really stood out in that it seemed to be the most inexpensive and simplest to use, which aligns with the World Health Organization’s criteria for developing these types of technologies,” she adds.

One of the major hurdles, Waller says, was deciding what paper substrate to use. She saw in previous studies on paper-based sensors, that hydrophilic papers, which absorb water, are most often used. “Because we’re measuring added iron in a dried food matrix, we needed to dissolve it first into an acid solution. However, when we used the hydrophilic paper, the color spot that developed was very inconsistent and the color was not easy to measure because the sample spread on the hydrophilic paper,” Waller says.

She continued to test papers that would support the development of the color spot they were measuring, and settled on a hydrophobic paper, which is embedded with silicone. This reduced the heterogeneity of the color spot on the paper, and provided a more accurate and reliable output.

Using her background in chemistry, she then researched different reactions with iron that could produce a visible color change on the paper, landing on the ferrozine reaction, which works in the widest range of temperatures. She reduced the amount of the liquids in the solution to a small microliter amount, put it on the paper, and dried it.

Andrade explains, “This method has fewer interferences [with other nutrients]. It has a bright magenta color. So when you see the smear on the papers, everything is concentrated. That’s why the color is so vibrant, and it dries fast. The color is very stable and stays the same when it dries.

“It took a while to figure out what method, because if the color goes away, we’re done,” he adds. “This is a very stable reaction, and the color has stayed stable for two years.”

This process resulted in the paper-based assay that changes color in response to iron in fortified foods. The researchers used Tanzanian wheat flour and infant formula that had already been fortified to test their sensor. They fortified corn flour in the study with iron to levels that the World Health Organization recommends.

The team also received a grant from the ADM Institute for Postharvest Loss to develop a smartphone app, in collaboration with Administrative Information Technology Services (AITS) at U of I, to quantify this color change using the smartphone application. With a cellphone, those who would be evaluating nutrient levels in fortified food take a photo of the paper sensor, after colors show up, and the app analyzes the iron levels.

Traditionally, the gold standard method for measuring iron in food samples, Andrade explains, is the use of atomic absorption or emission spectroscopy. However, this type of analysis can be expensive, requires trained personnel, and is usually only found in laboratories at universities or private industries.

But Andrade explains that smartphones are accessible in low-resource settings. “Studies show there is a penetration of cellphones in low-income countries. We have been there, and we understand the context, so we bring that to the design of these paper-based technologies.”

Waller traveled to Mexico on a Fulbright Fellowship to validate the sensor’s accuracy and consistency in detecting iron using foods from an actual fortification program, in comparison to the traditional method of evaluation of nutrient levels. Besides developing an inexpensive sample preparation kit that delivers valid, accurate, and reliable measurements, one of the experiments she did in Mexico was to compare how the smartphone app results compared to results on a desktop computer using software.

“One of the aspects published in this paper is the seamless transition from a desktop- to a smartphone-based analysis without jeopardizing sensor performance and validity,” Andrade says. “In our initial studies, we took a photo with a cell phone or camera, digitized it, and analyzed it using computer software. But what if the phone itself does the analysis instead of taking it to a desktop computer? Will the value obtained be these same? That’s what we had to test, and the answer is yes.”

Andrade adds that the validation of paper-based assays is key. “Many labs develop innovative detection platforms, but few validate their technologies in the field,” he added.

The paper, “Development of a paper-based sensor compatible with a mobile phone for the detection of common iron formulas in fortified foods within resource-limited settings,” is published in Nutrients [DOI: 10.3390/nu11071673]. Co-authors include Anna W. Waller, Marco Toc, Dylan J. Rigsby, Marcela Gaytan-Martinez, and Juan Andrade. Waller, Toc, and Andrade are all in the Department of Food Science and Human Nutrition in the College of Agricultural, Consumer and Environmental Sciences at the University of Illinois.