Redefining drought in the US Corn Belt 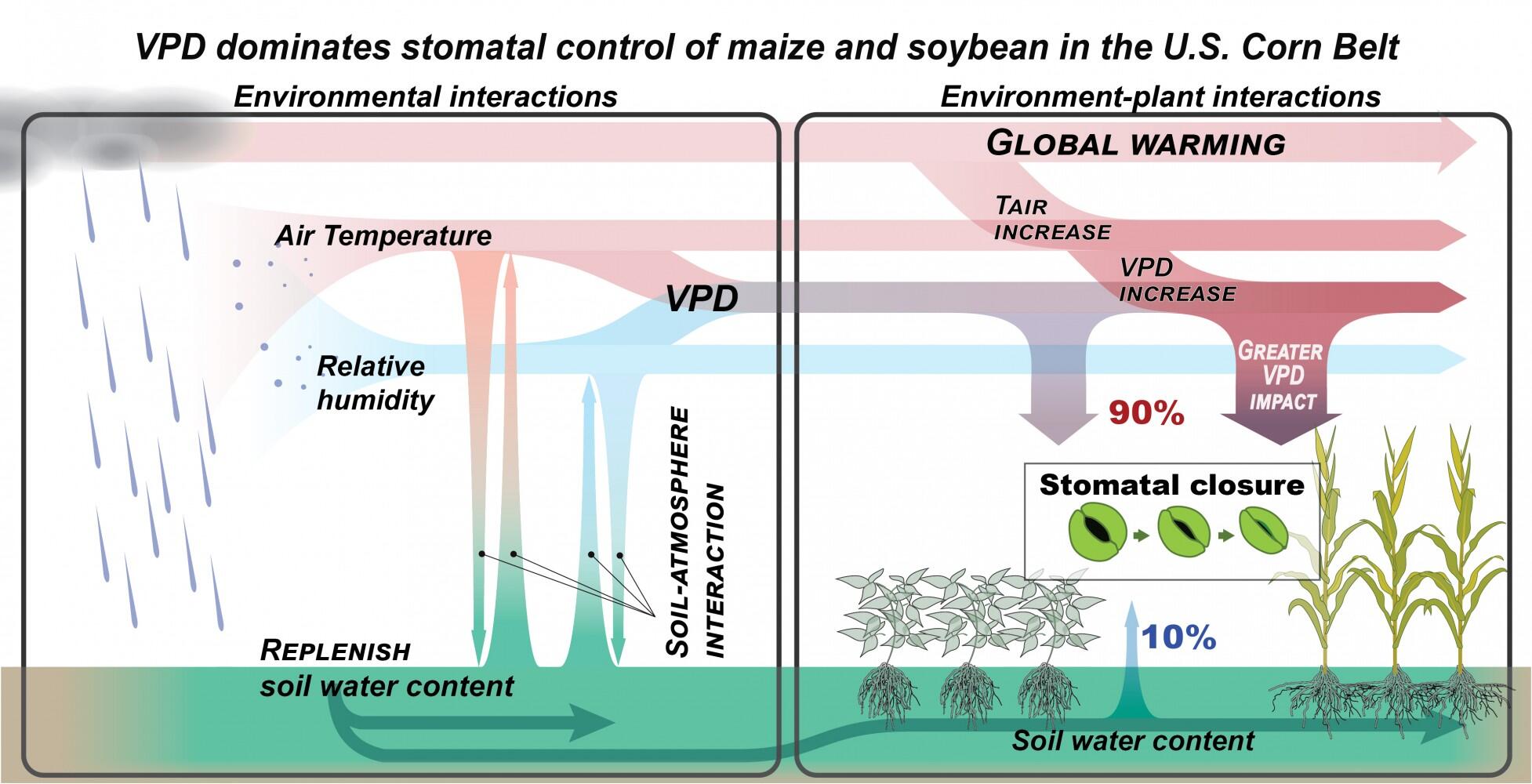 Redefining drought in the US Corn Belt

URBANA, Ill. – As the climate trends warmer and drier, global food security increasingly hinges on crops’ ability to withstand drought. But are scientists and producers focusing on the right metric when measuring crop-relevant drought? Not exactly, according to new research from University of Illinois scientists, who urge the scientific community to redefine the term.

“Plants have to balance water supply and demand. Both are extremely critical, but people overlook the demand side of the equation, especially in the U.S. Corn Belt,” says Kaiyu Guan, principal investigator on two new studies, Blue Waters professor in the Department of Natural Resources and Environmental Sciences and the National Center for Supercomputing Applications at Illinois.

The demand Guan refers to is atmospheric dryness, often expressed as vapor pressure deficit (VPD). The drier the air, the more moisture is sucked out of pores, or stomata, in plant leaves. Plants have to open stomata to take in carbon dioxide as their food, but if they sense the atmosphere is too dry, they’ll close pores to avoid drying out. Keeping stomata closed too long leads to reductions in photosynthesis, plant growth, and grain yield.

The kicker? Plants shut down stomata due to atmospheric dryness even when there’s an adequate supply of moisture in the soil.

“If you only consider rainfall and soil moisture, which is how most people think about drought, that’s mostly describing the supply side. Of course if you have low soil moisture, plants will be stressed by how much water they get. But the supply is often pretty sufficient, especially here in the U.S. Corn Belt,” Guan says. “However, the demand side from the atmosphere can also severely stress plants. We need to pay more attention to that drought signal.”

“By comparison, soil moisture typically accounts for 6-13% of these measures for corn and soybean, and up to 35% when considering time lag effects,” says Hyungsuk Kimm, doctoral student in Guan’s group and the study’s lead author.

In the other study, published in the Journal of Hydrology, Guan’s team focused on grain yield. Yield depends on many factors related to water cycles, but the researchers found that VPD explains the biggest proportion of variability in crop yield and also provides the earliest warning for yield loss when comparing with other water cycle metrics and traditional drought indices.

“This led us to build a new drought index integrating VPD, soil moisture, and measures of evapotranspiration, which can account for more than 70% of yield variation. Our index outperforms all the existing drought indices,” says Wang Zhou, postdoctoral researcher in Guan’s group and the study’s lead author.

Guan adds, “In these two studies, we tried to understand the demand side of drought from two major angles, one using eddy covariance data which measures landscape water and carbon use very accurately – the gold standard – and the other leveraging satellite data and model-simulated hydrological variables correlated with regional yield,” Guan says. “In both, we demonstrate VPD is more important than soil moisture to explain the crop drought response in the U.S. Midwest.”

Adjusting the drought concept for crops will be critical for global food security under a changing climate.

“When we look at climate change scenarios, the amount of rainfall is not changing much for the Corn Belt, but we for sure know temperature and VPD will increase here. That means not much will change on the supply side, but demand stress will increase significantly. And that type of stress is so connected to end-of-season crop yield,” Guan says.

His group is working on follow-up studies evaluating the role of irrigation in increasing supply and decreasing demand, but for now, Guan says breeding for improved water-use-efficiency could be an important part of the solution.

“Redefining droughts for the U.S. Corn Belt: The dominant role of atmospheric vapor pressure deficit over soil moisture in regulating stomatal behavior of maize and soybean,” is published in Agricultural and Forest Meterology [DOI: 10.1016/j.agrformet.2020.107930] and “Connections between hydrological cycle and crop yield in the rainfed U.S. Corn Belt,” is published in Journal of Hydrology [DOI: 10.1016/j.jhydrol.2020.125398]. Support from NASA, USDA NIFA, DOE, NSF, and Illinois NREC made the research possible.