Soy is a cost-effective way of adding protein to school lunches in developing countries, study shows 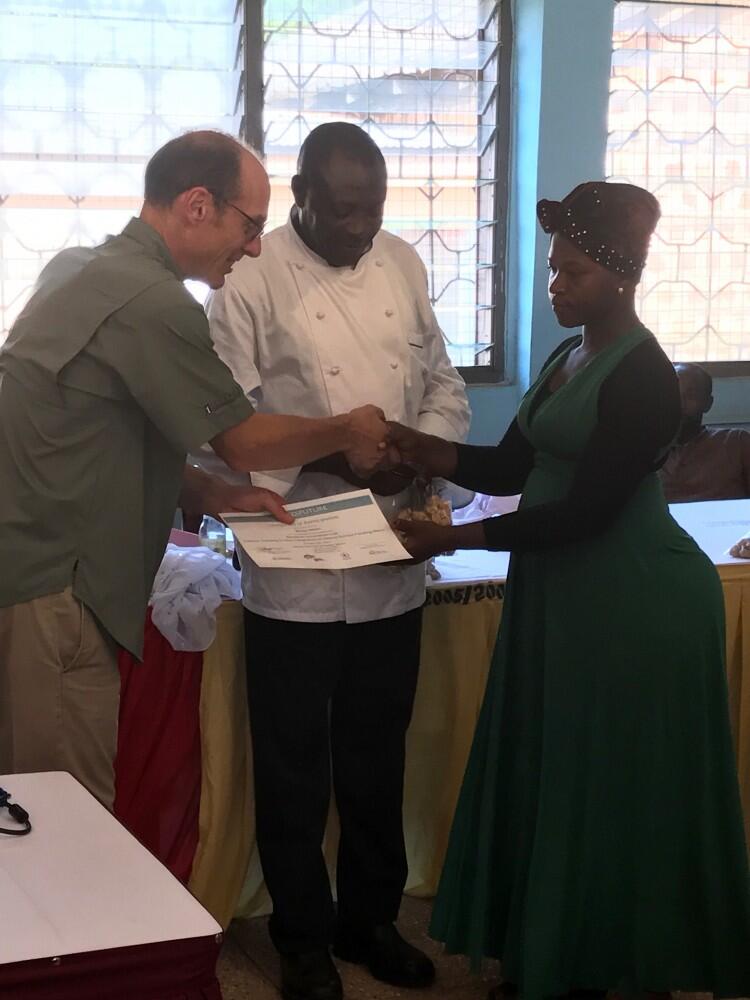 Soy is a cost-effective way of adding protein to school lunches in developing countries, study shows

URBANA, Ill. – Adding soy flour to school lunches in Ghana provides a cost-efficient way of increasing the protein level, according to a new study co-authored by a University of Illinois researcher.

Soy is known to be a low-cost protein source, says Peter Goldsmith, professor of agricultural and consumer economics at the U of I. “But the thesis that soy is a good ingredient in a national school lunch program had yet to be proven, though everyone assumed it.”

The researchers demonstrated the economic and nutritional impact of replacing some of the starch in a school lunch meal with soy products or another protein source. Their results showed that adding soy flour provides a low-cost way to increase the protein level in the meal.

Goldsmith is lead researcher for the USAID Feed the Future Innovation Lab for Soybean Value Chain Research, also known as the Soybean Innovation Lab (SIL), a program that brings together about 35 researchers from 17 different countries to study how soy can help reduce poverty and malnutrition in developing countries. SIL researchers conducted this study in cooperation with Catholic Relief Services and the Ghana National School Lunch Program.

Government-supported school lunch programs are important in many developing countries as a way to address stunting and malnutrition, Goldsmith says. In Ghana, the national school lunch program delivers a daily meal to more than 1.6 million students, or 38 percent of the country’s student population.

SIL researchers conducted a case study of four caterers delivering a traditional dish of tomato stew with rice. They interviewed the caterers and observed them as they prepared, cooked, and served the meal. Then they measured the nutritional content and estimated the cost per unit of protein.

The caterers receive recipes and basic training from the government, but have considerable flexibility in meal preparation. They receive a budget allowance per meal, and their operating margin depends on the cost of ingredients they purchase. This leads to considerable variation in actual nutritional content across caterers.

Therefore, it was important to measure the nutritional content directly, rather than relying on recipes or student recall of what they ate, as most studies typically do, Goldsmith says.

Overall 17 different ingredients were used, and only eight were common across caterers. Water content can also vary and that affects nutritional value, Goldsmith says.

The tomato stew recipe is estimated to provide 32 percent of the recommended daily allowance (RDA) of protein for very young students, but only 18 percent for 9-13 year olds. The most common protein source is dried mackerel, but it’s used in small amounts because of the expense. Thus, most of the protein is obtained from rice, which is a cheap starch, but it is very low in protein. So it is beneficial to replace some of the rice with a source that’s high in protein and has a superior amino acid profile.

After analyzing the nutritional content and cost per unit of protein in the meals, the researchers simulated the addition of three soy products–soy flour, texturized soy protein (TSP) and tofu– to the recipe, replacing 10 grams of the rice with 10 grams of the soy product.

The researchers found that soy flour and TSP added the most protein at the lowest cost. Tofu is also a good source of protein but less cost-efficient because of its high moisture and relatively low protein levels. Soy flour is about one-third cheaper per unit of protein than TSP and local proteins such as ground beef and dried mackerel.

“Soy flour is really a superior ingredient, since it’s a high quality protein and it’s very dense; it’s low cost and shelf-stable. Supplementing it up to 10 grams is very beneficial,” Goldsmith says.

TSP is also a cost-efficient source of protein with benefits similar to soy flour; however, TSP is currently not produced in Ghana and therefore is not practical to include at this point, Goldsmith says.

For comparison purposes, the researchers also simulated the inclusion of ground beef and mackerel, substituted for 10 grams of rice. Both are much more expensive than soy flour or TSP.

The next step is to train caterers to include soy flour so it can be implemented in the whole school lunch system. “We’ve shown the economy in it and the benefits to nutrition, now they see the results,” Goldsmith says.

Soy flour in the recommended amounts does not change the taste or texture of the food. “It’s not really a foodstuff, so you’re not creating a soy dish. It’s an ingredient that fortifies the local cuisine. There’s no change in flavoring or spices. That’s why soy is advantageous, because it just takes on the flavor of whatever you’re cooking. It’s really about fortification,” Goldsmith says.

The study’s findings can be extrapolated to other developing countries that have national school lunch programs and that are interested in cooking with soy.

“SIL started in Ghana but other countries have a huge interest in developing their soy value chain, so we are now in 17 countries; it has really grown,” Goldsmith says.

Adding soy flour to meals is a very low-cost solution to stunting and malnutrition, Goldsmith says. It can also provide benefits to economic development, as it can provide incentives to grow soybeans and replace current crops with soy.

“USAID wondered whether it was a good mechanism to address poverty and malnutrition; they didn’t know and needed to see evidence,” Goldsmith says. That’s where SIL’s research and its interdisciplinary team can be helpful to development organizations like USAID and Ministry of Gender, Children and Social Protection that operates the Ghana School Lunch Program.

The article, “National School Lunch Nutrition and Cost Profile: A case study of the Ghana School Feeding Programme,” is published in Food and Nutrition Bulletin and is available online. Authors include Peter Goldsmith, Juan Andrade, Margaret Cornelius, Mawuli Asigbee, Philip Atim, and Courtney Tamimie. The research is funded in part funded by the USAID Feed the Future Lab for Soybean Value Chain Research.