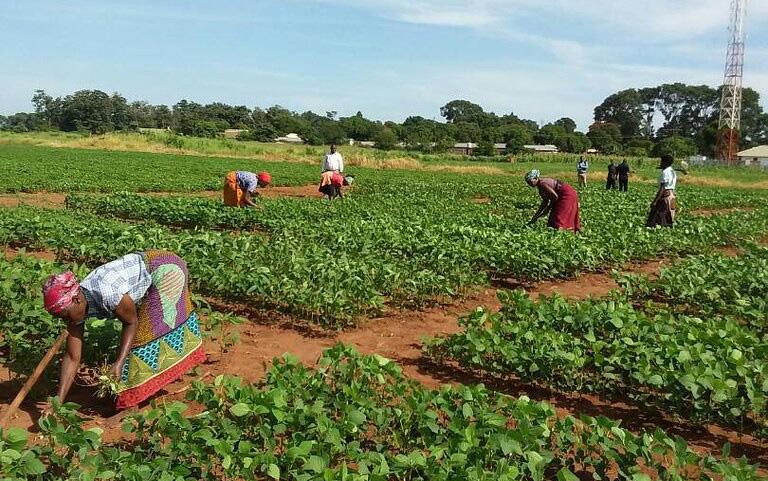 URBANA, Ill. ­– Soybean production in Africa and other developing regions has the potential to alleviate hunger and boost local economies. But the transition from traditional crops such as cowpea or cassava to a major commercial crop such as soybean is fraught with challenges.

The Soybean Innovation Lab (SIL), housed in the College of Agricultural, Consumer and Environmental Sciences at the University of Illinois, is funded by USAID’s Feed the Future initiative to help bring research-based innovation and technology to develop soybean production in Sub-Saharan Africa.

“The challenge is to feed the world and strengthen agriculture in developing countries,” says Peter Goldsmith, director of SIL and professor of agricultural and consumer economics at U of I.

“We conduct research that provides the answers to real questions facing practitioners working along the value chain, thereby helping to inform smart development and sustainable policies,” he adds.

Goldsmith explains that SIL’s economics team supplies critical information that can be put into practice by organizations working directly with farmers.

In one study, SIL researchers investigated the viability of soybean production for smallholder farmers in Ghana, especially women. The data originated with a donor organization that wanted to bring soybean production to hundreds of women farmers. The sponsor assumed that using a standard rollout of training and market linkages could make soybean a successful smallholder crop.

Goldsmith and study co-author Courtney Tamimie analyzed soybean adoption and performance data from the project for 453 smallholder farmers in northwestern Ghana from 2013-2015. Their research documented a steep learning curve for adopting soybeans as a commercial crop. This makes soybean a “long-jump” technology that requires significant shifts in production and marketing practices; a greater dependence on production credit; and different forms of commercial risk not found when producing traditional staple crops.

“Bringing in a crop that is management heavy and requires new technology is very difficult for farmers who are not part of a system.”

For a transition to soybean to be economically feasible, the authors say, smallholder farmers need to be part of a larger system that can provide guidance and support, because the technical load of soybean production is high.

“There are many successful outgrower models whereby the system provides the technology, services, credit, and extension support throughout the crop year, in exchange for grain at harvest,” Goldsmith says.

Systems such as cooperatives, outgrower networks, or commercial input/seed companies give farmers access to knowledge that boosts yields and income. Through the system, the farmer receives bundles that include all the components for high soybean yields and a profitable crop, such as certified seed, key inputs, and management support. Much like U.S. farmers, who operate within a rich support network of technology suppliers and advisors, smallholders in Africa also need to be part of a commercial crop system in order to stay competitive.

“In developing countries, the typical model is the independent, smallholder farmer. But that is not viable for a technology- and management-heavy commercial crop like soybean,” Goldsmith says. “That’s the nature of soybean in a developing country, and this was not known before SIL’s research.”

A second recent study from the economics team at SIL addressed whether soybean prices are abnormally low, thus making profitable soybean production difficult. Edward Martey, economist at the Savanna Agricultural Institute in northern Ghana, led a team to analyze soybean prices across six marketing regions in Ghana. The researchers note that common thinking among practitioners and their farmers was that low prices, not low yields, were to blame for poor profitability from soybean production in Ghana. Martey and co-authors Goldsmith and Nicolas Gatti show that this is not the case.

Soybean prices in Ghana compare quite favorably to international prices and are consistent with supply and demand factors in the country. The researchers did note that there is significant seasonality due to insufficient storage, poor road infrastructure, and challenging logistics during the harvest period.

“The price is very low at harvest and very high the week before harvest, because the country has very little storage capacity,” Goldsmith explains. However, prices overall were comparable to world prices, and sometimes they were even higher.

The researchers conclude that it’s not low prices that prevent adoption and profitability of soybean among smallholder famers in Ghana.

“The prices are fair; it’s that yields are too low, averaging about 10 bushels per acre for the average farmer, who applies few inputs and uses saved seed,” Goldsmith says. “So the question becomes, how can we help farmers increase yield?”

The SIL economics team also released a third study, looking at soybean grain and seed quality, in the series on soybean economics in Ghana.

In the developed world, pricing based on grain quality is well understood and transparent.

“In the U.S., when you take your grain to the elevator, there's a posted price and then there's a discount schedule for a set of attributes, including foreign matter, moisture, cracks and breaks,” Goldsmith explains.

However, developing countries do not have a reliable system of evaluating discounts, which can vary from buyer to buyer, and across the crop year. Poor information on quality hurts farmers who may be overly penalized, but also may not receive proper information to encourage delivery of quality grain and seed.

To better understand the relationship between grain quality and prices, Martey and Goldsmith conducted an experiment to understand the buying process of 227 traders in Ghana. That included three classes of traders: those who buy from farmers and sell in the local marketplace; those who buy grain and then sell it to the processors in the central part of the country; and those who are agents buying for processors.

While differences across trader types exist, discounts are consistent with hypothesized behavior and are not overly aggressive. Poor and variable grain and seed quality hurt farmers as they seek clear signals about market needs, as well as processors who struggle to operate efficiently. Greater transparency and the adoption and enforcement of national grades and standards would go a long way in supporting the development of the soybean industry in Ghana, the researchers say.

“These and other studies from SIL provide research-based information about the challenges facing soybean development in Africa by supplying practitioners and their organizations with critical knowledge that can better inform their policies and practices,” Goldsmith says.

The following articles are available online:

Funding for all studies was provided by USAID.