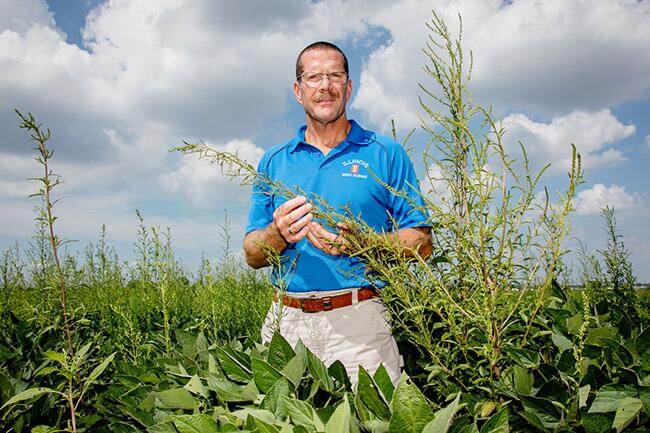 URBANA, Ill. – We’ve all heard about bacteria that are becoming resistant to multiple types of antibiotics. These are the so-called superbugs perplexing and panicking medical science. The plant analogue may just be waterhemp, a broadleaf weed common to corn and soybean fields across the Midwest. With resistance to multiple common herbicides, waterhemp is getting much harder to kill.

In a new study from the University of Illinois, scientists document waterhemp’s resistance to yet another class of herbicides, known as Group 15s. The study provides the first documentation of a non-grass plant to be resistant to Group 15 herbicides.

There are many herbicides on the market, but they all fall into one of 16 classes describing their mode of action (MOA), or specific target in the plant that the chemical attacks. Because of various regulations and biological realities, a smaller number of herbicide MOAs can be used on any given crop and the suite of weeds that goes along with it. Historically, about nine have been useful for waterhemp – and now the weed appears to be resistant to at least seven.

“In some areas, we’re one or two MOAs away from completely losing chemical control of waterhemp and other multiple-herbicide-resistant weeds,” says Adam Davis, head of the Department of Crop Sciences at Illinois and co-author on the study. “And there are no new herbicide MOAs coming out. There haven’t been for 30 years.”

Illinois weed scientist and co-author Aaron Hager adds, “We don’t want to panic people, but farmers need to be aware this is real. It continues on with the challenges we’ve warned people about for years.”

The research team tested the effectiveness of soil-applied Group 15 herbicides in a Champaign County population already resistant to five MOAs. They applied eight Group 15 formulations in the field at their label rates, and chose three – non-encapsulated acetochlor (Harness), S-metolachlor (Dual Magnum), and pyroxasulfone (Zidua) – for a rate-titration experiment in which the herbicides were applied at one-half, one, two, and four times the label rate.

The eight Group 15 products varied in their effectiveness, with encapsulated acetochlor (Warrant), S-metolachlor, metolachlor (Stalwart), and dimethenamid-P (Outlook) performing the worst. These products provided less than 25% control 28 days after application and less than 6% control 14 days later.

Of the rate-titration experiment, Hager says, “We found we could apply significantly higher than the labeled dose and still see resistance.” For example, S-metolachlor provided only 10% control at the standard label rate, 20% at 2x the label rate, and 45% at 4x the label rate.

Hager says farmers might not notice the poor performance of these soil-applied pre-emergence herbicides because waterhemp germinates continuously throughout the season. When a weed pops up mid-season, it’s hard to tell exactly when it emerged and whether it was exposed to residual soil-applied herbicides.

“If you think about how you use these products, rarely do they last the entire year. They’re very dependent on environmental conditions to work effectively. It could be too wet or too dry. Generally speaking, you have some weed escape. But many farmers would chalk it up to these weather issues. If you’re not thinking about it, you could very easily overlook resistance,” Hager says.

To confirm results from the field, the team performed a dose response test in the greenhouse. In that test, four waterhemp populations – three with resistance to multiple herbicides and one that is sensitive to all herbicides – were dosed with increasing levels of S-metolachlor, acetochlor, dimethenamid-P, and pyroxasulfone. Populations from Champaign County and McLean County survived higher levels of the Group 15 herbicides than the other populations.

Hager suspects the plants are breaking the chemicals down before they cause damage, a trick known as metabolic resistance. All organisms can turn on cellular defenses against toxins, but it is rather worrisome when weeds and other undesirable pests use their biology against human interventions.

“As we get into the era of metabolic resistance, our predictability is virtually zero. We have no idea what these populations are resistant to until we get them under controlled conditions,” Hager says. “It’s just another example of how we need a more integrated system, rather than relying on chemistry only. We can still use the chemistry, but have to do something in addition.

“We want farmers to understand that we have to rethink how we manage waterhemp long term.”

The article, “Characterization of multiple herbicide-resistant waterhemp (Amaranthus tuberculatus) populations from Illinois to VLCFA-inhibiting herbicides,” is published in Weed Science [DOI:  10.1017/wsc.2019.13]. Authors include Seth Strom, Lisa Gonzini, Charlie Mitsdarfer, Adam Davis, Dean Riechers, and Aaron Hager, all from the Department of Crop Sciences in the College of Agricultural, Consumer and Environmental Sciences at the University of Illinois. The research was supported by Syngenta Crop Protection. The article is also summarized on the Bulletin.