There’s a lizard in my lettuce: Illinois study spotlights surprising finds in salads 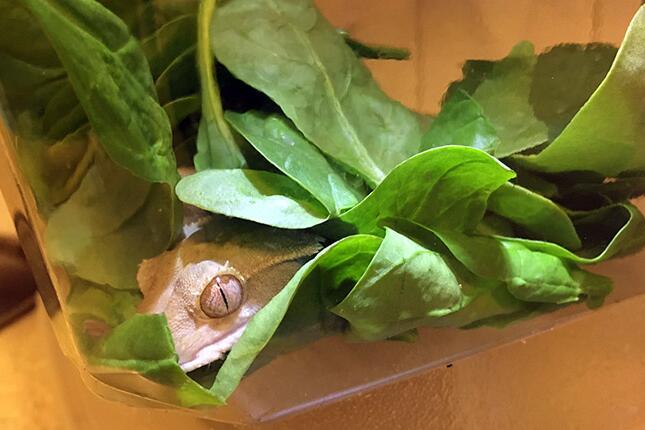 There’s a lizard in my lettuce: Illinois study spotlights surprising finds in salads

URBANA, Ill. – When a dead bat was found in a package of salad greens in 2017, the Florida story spurred product recalls and national media attention. The incident, assumed to be rare, was one of dozens of cases of consumers finding animals – live, dead, or severed – in fresh produce over the past 15 years. A University of Illinois study catalogues and analyzes these incidents as part of a larger effort towards greater food safety and quality improvements in the fresh produce industry.

“There’s a big food safety concern about any wildlife that gets into fields where fresh produce is grown, leading to various control measures, sometimes even drastic tactics,” says Daniel Hughes, postdoctoral researcher in the Department of Animal Sciences at U of I and lead author on the study. “We’re trying to find non-lethal solutions to exclude frogs from fields, but I realized even if we implement new technologies, how do we know we solved anything?”

Hughes is referring to the fact that there is no publicly accessible data documenting how often wildlife gets into fields and onto dinner plates, and therefore no benchmarks to measure success of new control measures. So, he started scouring the internet for media mentions.

“I started looking out of curiosity, saving links to articles of people finding frogs in their salads. Within a couple months, I had this long list. I realized there’s something more going on here that we’ve been led to believe. Every article I clicked on claimed it was super rare, but when you’re looking at 25 of those incidents, it doesn’t sound that rare to me,” he says.

Hughes decided to formalize his search using social science standards and wound up with 40 news stories from the United States between 2003 and 2018. He believes this sample strongly underestimates the true scope of the issue. For example, consumers may report incidents directly to the store or produce company and not to media, or stories may have appeared in print versions of newspapers and not been published online. Despite these shortcomings, Hughes’ efforts represent the first systematic analysis of available information on the issue.

Over 50% of the 40 incidents involved frogs, but lizards, snakes, mice, birds, and yes, a bat, were found in salad greens, green beans, or mixed vegetables. Ten of these – nine frogs and one lizard – were found alive.

In three-quarters of the incidents, the produce was conventionally grown, not organic.

“It was implied over and over in these articles: if you buy organic, getting a frog is par for the course, essentially,” Hughes says. “If that was true, we should have seen the opposite of what we found. We did not take into account market-share differences between conventional and organic produce, but this result ran contrary to common opinion.”

Ultimately, Hughes was hoping the media reports would suggest whether the presence of these animals in produce constitutes a true food safety crisis, or simply a food quality issue. The reports were inconclusive on that point, although the incidents were not directly linked to outbreaks of foodborne illness. Only the bat incident led to a recall, while most others led to apologies or offers to replace the product or refund customers.

Hughes thinks preventing animals from getting into the fields in the first place is the industry’s best bet. Currently, many operations achieve that by destroying non-crop vegetation near fields using so-called “scorched earth” tactics, which seem to have been implemented in response to major E. coli epidemics, such as the feral-pig-vectored spinach outbreak in 2006. This approach likely goes too far for wild frogs because previous research has shown they don’t harbor E. coli in the form or quantity usually responsible for foodborne illnesses.

With more information about when and where wildlife is getting into produce, farmers could adopt less drastic, more nuanced management strategies. For example, Hughes is testing new fencing materials to exclude frogs from fields and hopes to create a public portal for consumers to report incidents.

“If we could better track these incidents, it might be possible to detect geographic clusters where frogs or other small animals are more common, or times of year they’re more active. In those areas or times, it might be as simple as changing the crop rotation schedule or the produce variety to one where the animals can’t hide as easily,” Hughes says.

Automation and speed also factor in when critters come home from the supermarket.

“From a wildlife perspective, it’s really hard to screen for animals in the context of industrial-scale harvest speed and volume. You’d have to spend minutes checking each plant. Romaine, for example, is lettuce folded on lettuce, where it’s easy for moisture-seeking frogs to hide. From a business perspective, can you really spend minutes to check each leaf?”

It will take some time for the fresh produce industry to adopt co-management methods that support food safety and conservation, but with two major E. coli outbreaks in 2018, producers are more likely to prioritize food safety for the foreseeable future. In the meantime, Hughes has this advice for consumers:

“Keep eating fresh produce, especially leafy greens, and if you happen to get a live frog, please don’t release it in your backyard. Keep it as a pet or offer it to a local school for use as an educational tool. Releasing wild animals is how invasive species start, and could introduce disease into local frog populations. Just don’t do it.”

The article, “There's a frog in my salad! A review of online media coverage for wild vertebrates found in prepackaged produce in the United States,” is published in Science of the Total Environment [DOI: 10.1016/j.scitotenv.2019.03.254]. Authors include Daniel Hughes, Michelle Green, Johnathan Warner, and Paul Davidson. All but Warner are or have been affiliated with the College of Agricultural, Consumer and Environmental Sciences at the University of Illinois. The research was supported by the USDA’s Agricultural Marketing Service and the Center for Produce Safety.