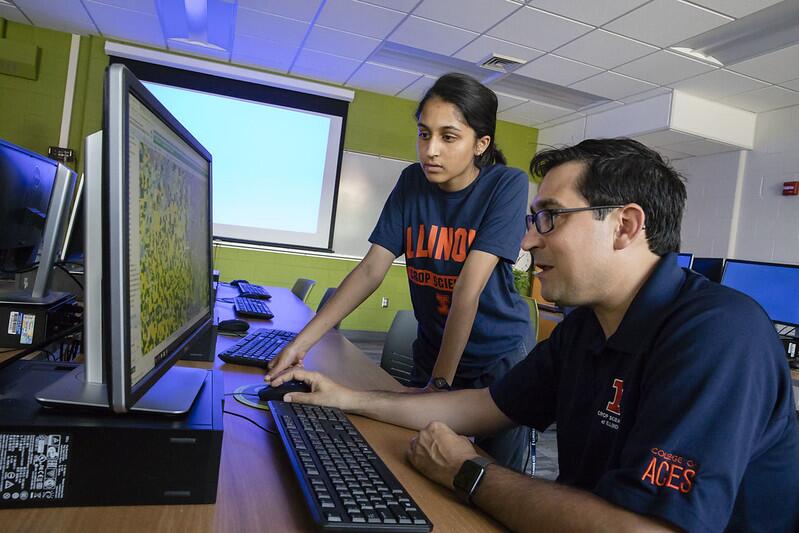 URBANA, Ill. – With some reports predicting the precision agriculture market will reach $12.9 billion by 2027, there is an increasing need to develop sophisticated data-analysis solutions that can guide management decisions in real time. A new study from an interdisciplinary research group at University of Illinois offers a promising approach to efficiently and accurately process precision ag data.

“We’re trying to change how people run agronomic research. Instead of establishing a small field plot, running statistics, and publishing the means, what we’re trying to do involves the farmer far more directly. We are running experiments with farmers’ machinery in their own fields. We can detect site-specific responses to different inputs. And we can see whether there’s a response in different parts of the field,” says Nicolas Martin, assistant professor in the Department of Crop Sciences at Illinois and co-author of the study.

Martin and his team worked with 2017 and 2018 data from the Data Intensive Farm Management project, in which seeds and nitrogen fertilizer were applied at varying rates across 226 fields in the Midwest, Brazil, Argentina, and South Africa. On-ground measurements were paired with high-resolution satellite images from PlanetLab to predict yield.

Fields were digitally broken down into 5-meter (approximately 16-foot) squares. Data on soil, elevation, nitrogen application rate, and seed rate were fed into the computer for each square, with the goal of learning how the factors interact to predict yield in that square.

The researchers approached their analysis with a type of machine learning or artificial intelligence known as a convolutional neural network (CNN). Some types of machine learning start with patterns and ask the computer to fit new bits of data into those existing patterns. Convolutional neural networks are blind to existing patterns. Instead, they take bits of data and learn the patterns that organize them, similar to the way humans organize new information through neural networks in the brain. The CNN process, which predicted yield with high accuracy, was also compared to other machine learning algorithms and traditional statistical techniques.

“We don’t really know what is causing differences in yield responses to inputs across a field. Sometimes people have an idea that a certain spot should respond really strongly to nitrogen and it doesn’t, or vice versa. The CNN can pick up on hidden patterns that may be causing a response,” Martin says. “And when we compared several methods, we found out that the CNN was working very well to explain yield variation.”

Using artificial intelligence to untangle data from precision agriculture is still relatively new, but Martin says his experiment merely grazes the tip of the iceberg in terms of CNN’s potential applications. “Eventually, we could use it to come up with optimum recommendations for a given combination of inputs and site constraints.”

The article, “Modeling yield response to crop management using convolutional neural networks,” is published in Computers and Electronics in Agriculture [DOI: 10.1016/j.compag.2019.105197]. Authors include Alexandre Barbosa, Rodrigo Trevisan, Naira Hovakimyan, and Nicolas Martin. Barbosa and Hovakimyan are in the Department of Mechanical Science and Engineering in the Grainger College of Engineering at Illinois. Trevisan and Martin are in the Department of Crop Sciences in the College of Agricultural, Consumer and Environmental Sciences at Illinois.

The University of Illinois and the College of ACES are leading the digital agriculture revolution with a new Center for Digital Agriculture; first-of-their-kind majors combining computer science and crop and animal sciences; the Data Intensive Farm Management project; engineering of teachable agricultural robots; and many more initiatives.