Holiday favorite good to go for 2022 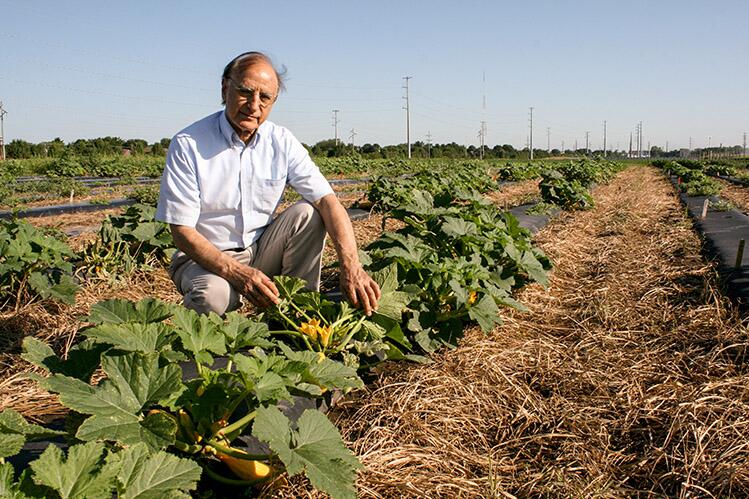 Few of us stop to wonder how that slice of pumpkin pie made it onto our plate, but if it weren't for the Illinois pumpkin industry and plant pathologist Mohammad Babadoost, the classic fall dessert might not be on the menu at all. Back in 1999 and 2000, a devastating pumpkin disease threatened to wipe out the crop in Illinois - the number-one pumpkin-producing state in the nation - but Babadoost came up with solutions to not only prevent the industry's collapse, but to help it grow.

Today, the pumpkin disease continues to rear its head, but Babadoost is there to fight back. And he reports the crop looks good in 2022.

"We started a timely pumpkin season in 2022. As I do every year, I had trials on canning pumpkin at a commercial field near Pekin and at the UIUC Vegetable Research Farm in Champaign, IL. Phytophthora blight, caused by Phytophthora capsici, is still the most important disease of canning pumpkins. Moisture is vital for development and spread of Phytophthora blight, but June and July were a bit drier than the past. Also, we have developed an effective management of Phytophthora blight. Combine these factors together, and we had very limited loss to Phytophthora capsici. In addition, we did not get downy mildew disease in Illinois, which comes from the southeastern states (e.g., Florida). So, we had very good yield and canning product in Illinois this year," says Babadoost, Professor and Faculty Extension Specialist in the Department of Crop Sciences. "Thus, everyone can have as many pumpkin pies as they wish."

Below, we reprise a 2017 ACES@Illinois feature on Mohammad Babadoost's role in bringing pumpkins to our plates. Read on!

Meet the Pumpkin King of Illinois

It was a scene of utter devastation.

When Mohammad Babadoost first visited Tazewell County’s pumpkin farms, he saw nothing but field after field of melted pumpkins and vines.

“Why did you ask me to come here? You should have called the FBI,” he recalls thinking.

Babadoost can make light of the situation now, but in 1999 and 2000, the disease that was wiping out the pumpkin industry in Illinois was no laughing matter.

“Two processing pumpkin companies wrote me letters in 2000 saying there was no way they could survive any longer. In some fields, they were seeing 100 percent losses. Other fields, it was 50, 60, 80 percent. Some had never harvested anything from their fields,” says the Department of Crop Sciences plant pathologist.

The culprit was an oomycete by the name of Phytophthora capsici, a fungus-like pathogen that specializes in vandalizing pumpkins, cucumbers, melons, squash, and other cucurbit fruits. But it would soon meet its match in Mohammad Babadoost.

Babadoost hasn’t always been the Pumpkin King of Illinois. In fact, he grew up rather far away from Illinois, in a farming village in the Azerbaijani region of northwest Iran.

Young Mohammad witnessed the hunger and malnutrition that can result from crop losses and poor production. The experience inspired his career.

“When I was a kid, I didn’t know what plant pathology was,” Babadoost says. “I just saw that a disease could come and wipe out everything.”

When it came time for college, he enrolled in the Department of Plant Protection at the University of Tabriz in Iran. From there, he bounced around earning advanced degrees and battling plant pathogens in hot spots around the world. During those years, he worked on sugarbeet nematode, an important pest in Europe; a bacterial disease affecting Brassica crops in Washington; mycotoxins of wheat and corn in North Carolina; and seed potato diseases in Montana. He also spent some time back in Tabriz, teaching and establishing research facilities and a graduate program in his old department.

After all the moves, Babadoost and his family decided to finally put down roots in the U.S. He applied for a position in the crop sciences department at Illinois, and got an offer a week later. It was 1999.

The scoop on squash

You might not recognize the pumpkins Babadoost works with most often. Called processing pumpkins, they go into the cans that fly off the shelves at Thanksgiving. They don’t look much like your run-of-the-mill Jack o’ Lantern, although he works with those, too.

“Botanically speaking, what we call processing pumpkins are really winter squash,” Babadoost explains. “They are egg-shaped, and the color is more yellowish orange than completely orange.”

In 1999, there were approximately 6,000 acres of processing pumpkins in Illinois. By 2012, that number swelled to 16,100, making Illinois the country’s top pumpkin-producing state by a wide margin – 92 percent of all processing pumpkins are grown and processed here. Many growers credit Babadoost with the fact that the industry not only didn’t collapse in 1999 but actually grew more than 2.5 times. Today, Babadoost estimates, the Illinois pumpkin industry is worth $20 million.

“If Mohammad couldn’t have solved the problem, the processing pumpkin industry might have moved out of Illinois,” says retired U of I Extension educator and Jack o’ Lantern farmer Mike Roegge. “But he discovered the problem, and he found a solution for it. We gotta put him on a pedestal for what he’s done.”

Back in 1999, the problem – and the solution – started with the seeds. Babadoost explains.

It turns out the pathogen was everywhere in the soil. With each planting, seedlings would push out tiny roots and leaves, but the delicate tissues were quickly consumed by the oomycete.

“My first thought was ‘We have to get the seeds germinating and seedlings up.’ I quickly developed a seed treatment at almost no cost –maybe less than less than 50 cents per acre. It worked very well. After that, almost no one had to plant a second time,” he recalls.

That seed treatment was a simple coating of fungicide powder. Producers simply had to soak seeds in water, add the powder, shake, and plant. It was enough to protect seedlings for up to five weeks – a good start, but it wasn’t always enough.

“We needed to get to about 12 weeks for the best protection,” Babadoost says. “I quickly started screening fungicides. The only one that was registered for pumpkin at the time actually made the problem worse! But I found one for oomycetes, tested it, and realized it was just great.”

The problem was almost solved, but Babadoost knew there was more he could do to keep Phytophthora capsici at bay. He realized that the pathogen was happiest in low-lying wet areas in the field.

“I came to the conclusion that if we simply go and scout the field, we might be able to stop the entire field from becoming infected. If we find the low-lying spots in the field, we can remove and destroy any infected plants and prevent building up the population of the pathogen. This simple solution was actually very helpful.

“I also started screening cultivars for resistance to the pathogen, tested a few more fungicides, and found some very effective ones,” Babadoost says. “Then, gradually, not only did the processing pumpkin industry not die, it actually increased.”

Known around the world for his pumpkin expertise, Babadoost receives regular calls to consult and present his findings overseas and across the United States. But he hasn’t forsaken the connections he’s made in Illinois. Every year, he tests fungicides and makes new recommendations that are specific to Illinois producers. “I’m in constant contact with the growers,” he says.

Roegge adds, “Everybody who grows commercial pumpkins in Illinois knows Mohammad on a first-name basis. He’s that important to the industry.”

Babadoost has clearly played a major role in resurrecting this economically important crop in the state, but pumpkins are more than a cash crop to him. “Pumpkins are really educational,” he says. “Hundreds, thousands of people come out each fall to farms to pick out pumpkins. Someone from Chicago with no farm experience picks a pumpkin, takes a picture, enjoys it.”

So, as you think about things to be thankful for at this time of year, be sure to give a nod and lift a fork to the Pumpkin King.