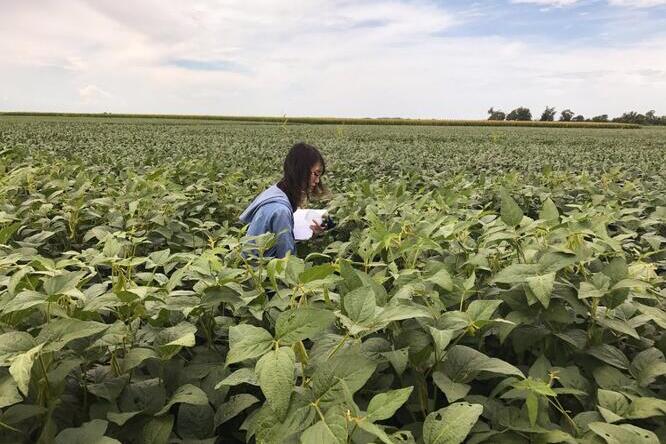 URBANA, Ill. – Septoria brown spot may be the common cold of soybean diseases, but that doesn’t mean it’s entirely benign. The ubiquitous fungal disease can cause 10 to 27% yield loss, according to University of Illinois research. For many farmers, the obvious response is to fight back with fungicide, but a new U of I study shows Septoria can actually increase after fungicide application.

“When we applied the fungicide, most of the fungi on plant surfaces decreased. But a few went up, Septoria among them. It was very surprising,” says Santiago Mideros, assistant professor in the Department of Crop Sciences at U of I and study co-author.

The study, led by former crop sciences doctoral student Heng-An Lin, was designed to identify and track the soybean mycobiome – the collection of fungi living on soybean plants – in real-world field conditions. The researchers hoped to learn how Septoria interacts with other plant-associated fungi and how fungicide affects them all.

Lin and Mideros inoculated half the soybean seedlings in their field trials with Septoria. Then, using genetic information and sophisticated bioinformatics analyses, they identified fungal species on leaves throughout the season, before and after applying fungicide.

“We chose this particular fungicide, a mixture of fluxapyroxad and pyraclostrobin, because it's quite commonly used nowadays in the U.S. Midwest,” Mideros notes. “It's something we thought had field relevance, according to current management practices in soybean.”

The fungicide knocked back many fungi, but again, not Septoria. Mideros thinks the fungicide removed Septoria’s competitors, allowing the pathogen to flourish.

The surprising result calls into question the common practice of yield-protective fungicide application.

“Based on previous research, we know when we spray a lot of fungicide, like every week, the symptoms of Septoria are kept in check and yield increases,” Mideros says. “But that application frequency isn’t feasible for farmers. This study is a closer approximation of what producers actually do, with one to three applications during the season.

“I'm not saying fungicide wouldn't increase yield in some fields. It might. But what I'm getting out of this study is that we don't know exactly what we're doing when we apply fungicides to protect yield. We need to learn a lot more about the unintended effects of chemical applications. We could be doing things more effectively if we had a better understanding of all the changes to the systems when we do a fungicide application.”

Although the jury’s still out on whether producers should shelve the fungicide when battling Septoria, the study provides an important look at how the soybean mycobiome interacts. The researchers identified a total of 3,342 distinct fungi on the three soybean lines they studied, some pathogenic, others beneficial, and still more whose effects on soybeans haven’t been characterized.

Knowing what fungi are on each soybean line and how they interact could pave the way for future disease-fighting tools, such as biocontrol agents.

“One of the things we were trying to address with this analysis was to see which fungi are associated with each other. If we found patterns where one fungus seemed to have a suppressive effect on another, it could be used as a biocontrol agent. We did find some negative associations, but not many, and unfortunately, none with Septoria,” Mideros says. “But there are several organisms that have a negative association with other fungi, so it's something we could follow up on.

“There's a lot of interest in finding more sustainable management practices, and it could come in the form of bio-fungicides or manipulations of the mycobiome that could result in lower disease and higher yields. There is a world of hidden microorganisms associated with our crops we could tap into.”

The article, “The effect of Septoria glycines and fungicide application on the soybean phyllosphere mycobiome,” is published in Phytobiomes [DOI: 10.1094/PBIOMES-12-21-0075-R]. The research was supported by the USDA National Institute of Food and Agriculture.