All in the planning: State policies working to fix Gulf nutrient pollution 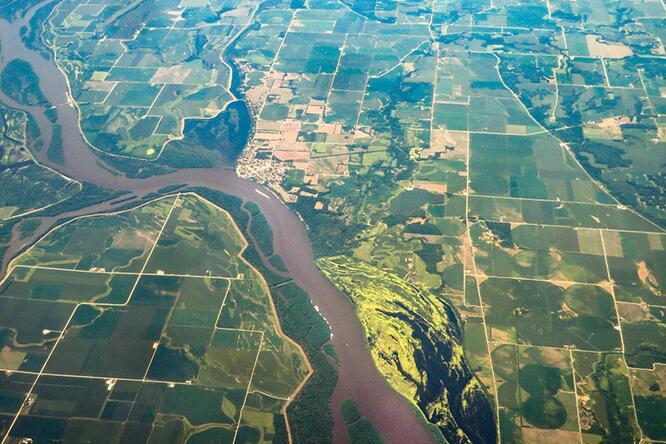 Aerial view of the Mississippi River. Photo from Ken Lund via Flickr [https://bit.ly/3w4TH3v].

URBANA, Ill. – Tackling nutrient pollution in the Gulf of Mexico is a big job, requiring coordination between dozens of states whose waters flow into the Mississippi. Although a 2011 U.S. Environmental Protection Agency memo set a framework for each state to reduce its nutrient load, it was up to the states to set their own policies in motion.

More than a decade on, critics have questioned the effectiveness of state nutrient reduction strategies, noting the still-massive hypoxic dead zones in the Gulf. In a new University of Illinois-led study, social scientists looked at the process states took to develop and implement their strategies, identifying key strengths and challenges that can inform other large-scale cooperative efforts.

“States really took advantage of the policy window opened by the EPA memo and its directive to create nutrient reduction strategies at the state level. After 2011, when groups started meeting, there was a lot of energy across the region to bring people together and try to come up with innovative new solutions. Ten years later, that energy is more dispersed. So, utilizing that policy window is a key lesson for other multi-state planning processes,” says Chloe Wardropper, assistant professor of natural resource policy in the Department of Natural Resources and Environmental Sciences at U of I and lead author on the study.

Wardropper adds that the initial planning process was crucial in terms of inclusivity, bringing together stakeholders with many different perspectives. She says, “Planning processes might seem boring, but they are one of the most important ways that democracy functions and they can significantly impact policies that are developed.”

The researchers also identified a trend across states: Framing nutrient reduction in terms of its effects on local water bodies was more motivating than talking about effects in the far-away Gulf of Mexico.

“Roughly 40% of the land area in the continental United States drains to the Mississippi River. It is a huge watershed and hard for people to connect their actions in the Upper Midwest to negative impacts far away in the Gulf of Mexico,” notes Ken Genskow, a professor of environmental planning and policy at the University of Wisconsin Madison and one of the article’s co-authors.

While important to keep that distant goal in mind, the authors add that emphasizing impacts on local lakes and streams is an important strategy for catalyzing action. For example, Wardropper says Ohioans are more aware of and concerned about harmful algal blooms in Lake Erie than about hypoxic zones in the Gulf of Mexico. And across the region, stakeholders were more motivated by similar local concerns.

States faced common challenges in implementing nutrient reduction strategies, specifically the voluntary nature of most programs and the sheer scale of implementation needed to achieve significant results. Wardropper says that scale is one significant reason why nutrient loads continue to exceed ideal limits heading into the Gulf.

“It's going to take a really long time to see big changes because of the biophysical dynamics of such a huge watershed,” she says.

Although water quality improvement in the Gulf of Mexico remains difficult to measure, the researchers conclude that the approach – leveraging federal influence to drive policy discussions and engagement across a region – achieved a measure of success and can be used as a model for coordinated action on environmental issues across states.

The article, “Policy process and problem framing for state Nutrient Reduction Strategies in the US Upper Mississippi River Basin,” is published in the Journal of Soil and Water Conservation [DOI: 10.2489/jswc.2023.00025]. The research was supported by a USDA Hatch Multistate Research Project, a USDA McIntire-Stennis award, and a National Science Foundation award.