Best way to estimate costs for invasive plant removal? Get out and dig 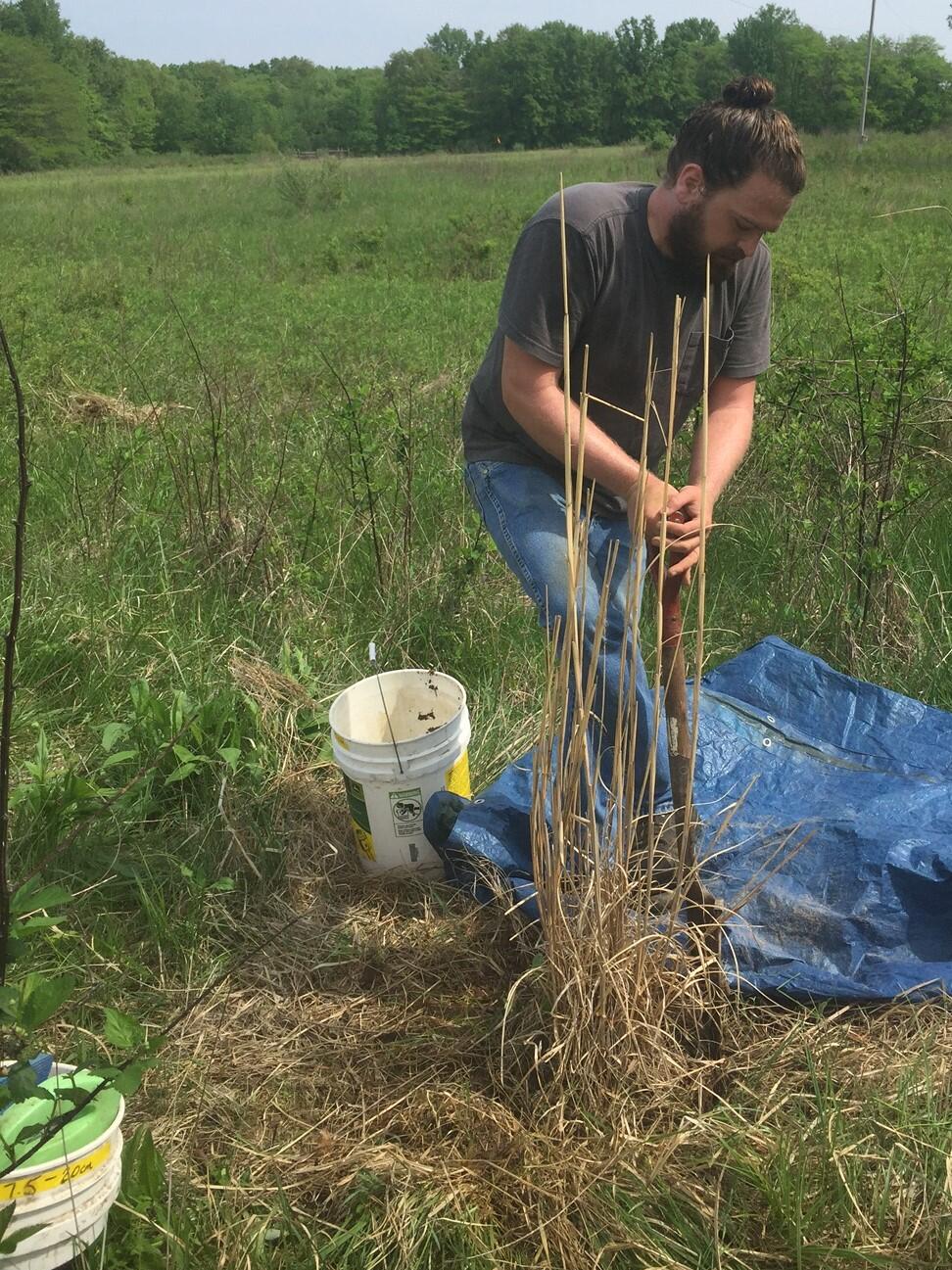 URBANA, Ill. – Plants are designed to travel. They might not stand up and walk, but many plants produce seeds or other bits that can be carried long distances by wind or animals and start growing. While that might be great news for the plant, escapes like these can disrupt natural ecosystems and be costly to remove.

But just how costly?

According to University of Illinois agricultural ecologist Adam Davis, many cost estimates for cleaning up unwanted, invasive plants are just that: estimates, extrapolated via desktop analysis from relatively scant data. Unsatisfied with that, Davis suffered hornet attacks and years of backbreaking labor to arrive at real dollars and cents associated with removal of escaped Miscanthus plants.

“The last couple years, I would spend a week in late September digging 3 feet down to recover Miscanthus giganteus rhizomes. And getting poison ivy, and getting pelted by this crazy group of black, bald-faced hornets. It was kind of hazardous research, and frankly, it’s still not fully eradicated,” says Davis, professor and head of the Department of Crop Sciences at Illinois and senior author on a recent study in Invasive Plant Science and Management.

Davis and his research team intentionally planted controlled invasions of Miscanthus giganteus and Miscanthus sinensis in six floodplain and old-field locations across Illinois to simulate potential escapes from bioenergy plantations and horticultural plantings. When it was time to clean up, they kept track of what they spent on herbicides, equipment, travel, and personnel hours: between $85 and $3,316 per site.

That range reflects differences between sites, species, and the sheer tenacity of some individual plants.

“The sinensis and the plants in floodplain forest died pretty easily with herbicide alone, partly because Miscanthus doesn’t like having wet feet. So, those plants obligingly died. But the giganteus did not. It had rhizomes so deep that we were getting decent aboveground kill, but survivors just kept on coming back and back and back,” Davis says.

Carolyn Lowry, an assistant professor at Penn State and lead author on the study, adds, “The giganteus was harder to kill, but at least it stayed put. Whereas with the sinensis, we discovered a few plants across the road, where they had dispersed.”

That’s the problem with viable seeds, after all. Unlike Miscanthus sinensis, Miscanthus giganteus is touted for its non-invasive qualities due to seed sterility, though Lowry points to examples of viable giganteus seed in the paper.

In any case, having sprayed, clipped, hacked, and suffered through seven years of eradication, the team calculated eradication costs, arriving at a range of $85-$547 for floodplain sites and $390-$3,316 for old fields.

“I’m not an economist, but I was able to pull together the costs associated with everything Adam and his team did over those seven years,” Lowry says. “Of course, it’s not usually department heads doing this work. So, I reached out to multiple companies that do invasive plant eradication for their hourly rates.

“In the end, we likely underestimated the on-site costs because we had planted these plants ourselves and knew right where they were. Normally, people have to spend a lot more time scouting for invasive species,” she adds.

Once she had a range of real numbers associated with Miscanthus eradication, Lowry scaled up using a database called EDDMaps that tracks the locations of invasive species across the U.S. At the time of the study, Miscanthus sinensis was shown in 1,347 locations, mostly in the eastern half of the country. Applying the range of on-site costs to all 1,347 occurrences, Lowry came up with a median estimate of $22 million – and a range of $10 to $37 million – to eradicate escaped Miscanthus.

“A lot of studies that talk about eradication costs are estimated through surveys, but there haven’t been many studies that have actually done the work to eradicate populations and use those data,” Lowry says.

Miscanthus is not currently being scaled up for bioenergy plantations, as promised a decade ago. But the invasion potential is still strong, given the genus is still heavily marketed through the horticultural industry. Furthermore, Davis points out with increasing fossil fuel costs, bioenergy may start looking more attractive again in the not-too-distant future.

If that happens, Davis has this advice: “If you're somebody who's planning on establishing a plantation of a non-native species, as part of your business model, you might want to consider what it would cost to get rid of it at the end. Just try to make some estimates on the best possible figures that you've got. Think through the process of eradication on a square-meter basis. How much time would it take you to eradicate that square meter, and then scale that out and see whether that cost is acceptable to you.”