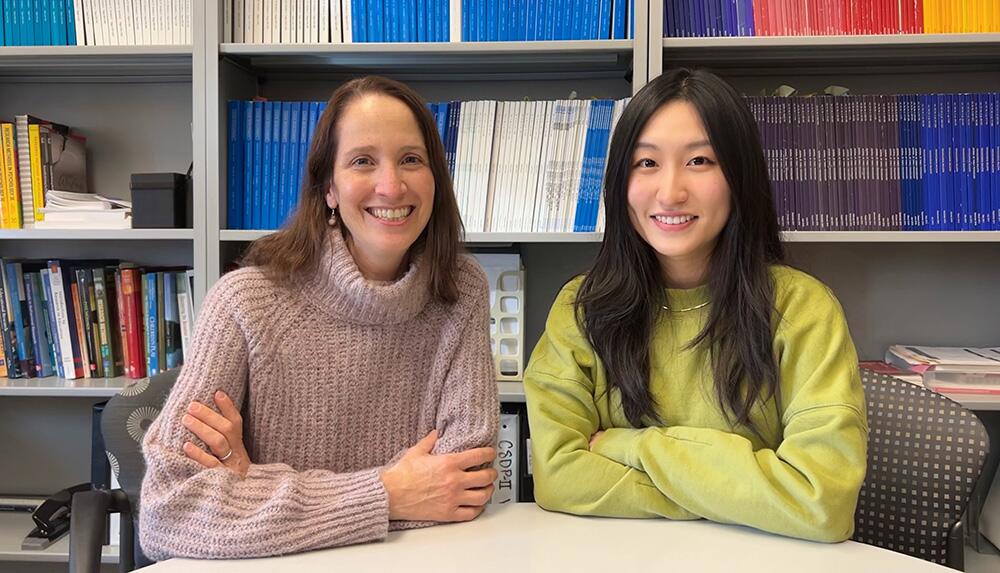 URBANA, Ill. – Interpersonal trust is a crucial component of healthy relationships. When we interact with strangers, we quickly gauge whether we can trust them. And those important social skills may be shaped by our earliest relationship with caregivers.

Adolescents who had an insecure attachment to their mothers as toddlers are more likely to overestimate the trustworthiness of strangers, according to a new study from the University of Illinois.

“The idea is to understand whether early attachment relationships with mothers have a longitudinal, predictive association with how adolescents process cues related to trustworthiness, both at the behavioral level and the brain level,” explains Xiaomei Li, doctoral student in the Department of Human Development and Family Studies (HDFS) at U of I and lead author on the paper.

The project builds on data from the Children's Social Development Project, a longitudinal study conducted under the lead of Nancy McElwain, HDFS professor and co-author on the paper.

In the first round of data collection, 128 toddlers and their mothers participated in a laboratory visit where researchers observed their interactions and evaluated their attachment style.

Ten years later, when the children were in their early adolescence, they were invited back for a second round of studies. This time, the researchers wanted to observe how the adolescents evaluated the trustworthiness of strangers.

Placed under an MRI scanner, the adolescents viewed pictures of faces and were asked to rate the trustworthiness of each face on a scale from 1 to 5. Simultaneously, the MRI scanner measured their brain activity. In rating trustworthiness, adolescents were told to consider how likely they would be to approach the person for help or directions if they were alone in an unfamiliar city.

The pictures were selected from an established database containing photos of actors posing with emotionally neutral faces. The faces show varying degrees of trustworthiness, determined and validated by prior studies among independent observers who rated how trustworthy each face appears to be according to their first impressions and gut feelings.

“The adolescents who had a history of secure attachment showed greater sensitivity to untrustworthy cues compared with their insecure counterparts,” Li states.

“We were able to see how early relationship dynamics during toddlerhood, which is a key period for social-emotional development, predicted adolescent functioning, even at the level of the brain.”

The core of attachment theory is whether the child trusts their primary caregiver to provide warmth and comfort when needed. Inconsistent or unreliable support from the caregiver can lead to a pattern of insecure attachment.

“Because children with an insecure attachment have experienced inconsistent and unreliable care when they are young, they may now choose to avoid negative social cues as a defensive mechanism to protect themselves. The lack of brain activation supports this explanation, suggesting that insecure adolescents are not processing untrustworthy cues,” Li says.

“In comparison, adolescents with a secure history of attachment may be more open to thinking about and responding to negative social cues.”

The findings also suggest the importance of parents being open to their child’s negative emotions, McElwain states.

“It’s okay for children to be upset and these are important, teachable moments when parents can help children deal with their emotions in an age-appropriate way. By doing so, children will be better prepared to engage in whatever comes their way later on.”

McElwain emphasizes the effects of early experience are not irreversible.

“So much brain development happens during adolescence. Teens are much better able to consciously reflect on their experiences and emotions, which makes it a great time to intervene and change behavioral patterns that are not working well. Parents, as well as other adults such as teachers or coaches, can help children and adolescents learn how to engage with negative social cues or social situations through open discussion, role playing, and positive modeling.”

The Department of Human Development and Family Studies is in the College of Agricultural, Consumer and Environmental Sciences, University of Illinois.

Funding: National Science Foundation, the USDA National Institute of Food and Agriculture, the University of Illinois Research Board, and the Jacobs Foundation, Switzerland.