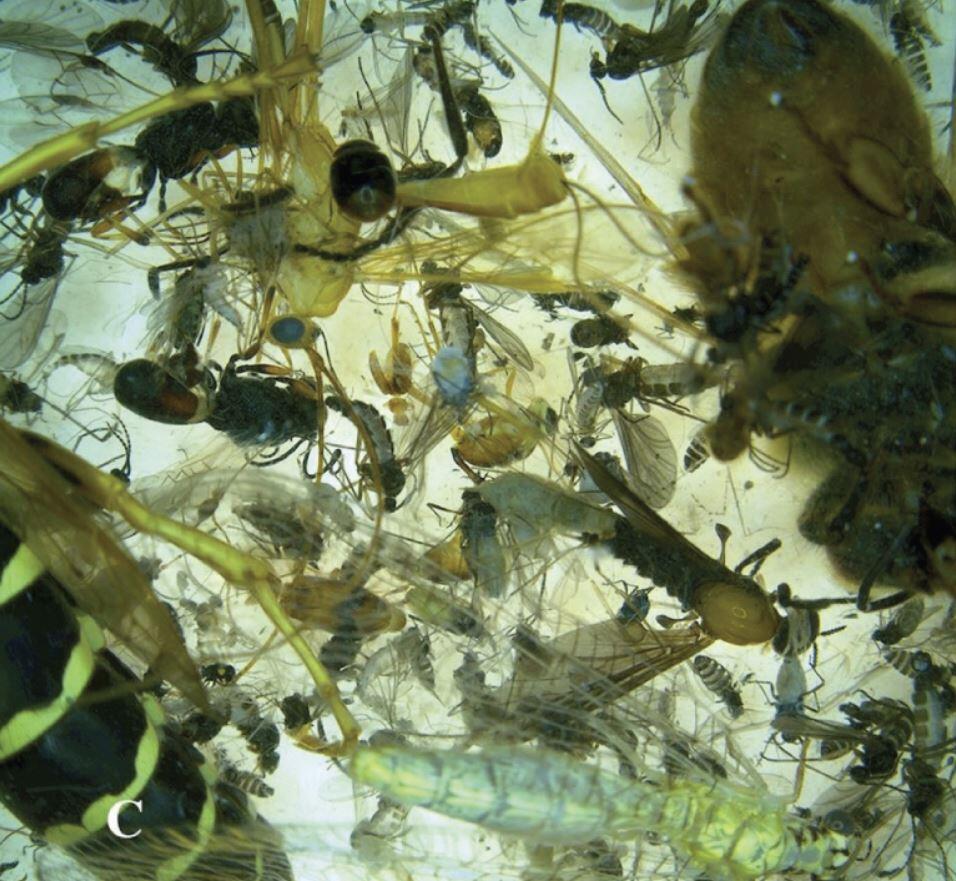 URBANA, Ill. – Like most invasive species, when the soybean aphid arrived in the Midwest in 2000, it brought none of its natural enemies along for the ride. So, naturally, finding itself in the soybean capital of the world, the tiny insect went bonkers. Taking advantage of a nifty ability to reproduce without mating, populations exploded and the soybean aphid quickly became the number one insect pest affecting the crop.

Scientists from the University of Illinois got to work almost immediately to track the pest’s movement. They have been collecting soybean aphids throughout the Midwest for the past 18 years, but along the way, they learned a lot more than they expected. In a new report published in American Entomologist, the researchers share their insights.

In 2001, David Voegtlin of the Illinois Natural History Survey set up the first in what would become a regional network of suction traps: PVC pipes extending 20 feet into the air above agricultural fields. Inside, a fan whirls and directs sucked-in insects down into a solution of water and antifreeze, which turns out to be an excellent preservative for bugs, microbes, and genetic material.

For many of the past 18 years, 30-odd traps across the Midwest have been running continuously during daylight hours. And weekly, the contents of the trap are collected and sent to the USDA research lab at the U of I for analysis. That’s where Doris Lagos-Kutz comes in.

“There is so much we have learned about the soybean aphid, including spatial and temporal patterns of migration, and about other bugs found in the traps,” says Lagos-Kutz, research associate in the USDA Agricultural Research Service and Department of Crop Sciences at the U of I, suction trap analyst, and co-author on the report. “Ultimately, data from the suction traps will help explain the factors that affect insect population dynamics on a continental scale.”

Glen Hartman, report co-author and soybean pathologist for the department and USDA-ARS, adds, “The pattern of aphid outbreaks often differs from year to year. By learning where the aphid outbreaks occur, we can associate that back to weather patterns, which could help us project the distribution of these insects under various weather and climate change scenarios.”

Because the traps don’t discriminate, the scientists have been able to identify many other insects, including some that appear to be expanding their range due to climate change or habitat suitability. For example, in 2015, the traps allowed Lagos-Kutz to detect sugarcane aphid in Kansas and northern Wisconsin for the first time. Detection of the insect, usually only found in southern coastal regions in the U.S., could signal an early threat to sorghum, Miscanthus, and other economically important crops outside the sugarcane growing region.

The traps have also captured cannabis aphids near industrial hemp operations; thrips, which can be vectors for crop-damaging viruses; and mosquitoes, an important vector of human diseases.

Lagos-Kutz notes that the contents of the traps are preserved and available for investigation by other scientists, and hints that there’s an untapped mine of information in the collection. “Using next-generation sequencing, we could potentially discover previously unknown organisms in these samples.”

Hartman says the traps could also provide information about the air microbiome and air pollutants. “We have a goldmine here. The traps collect all kind of things in the air, inert and biological. Who knows what other biological and chemical entities could be pulled out of these samples?”

The ultimate aim is to find funding and collaborators to spread the suction trap network nationwide, and keep it going indefinitely. There’s already a set of traps in the Pacific Northwest, but the two networks aren’t formally linked.

“We’d certainly like to have a bigger footprint. This is an extremely valuable source of information that extends well beyond agriculture,” Hartman says. “It’s the monitor for life in the air.”