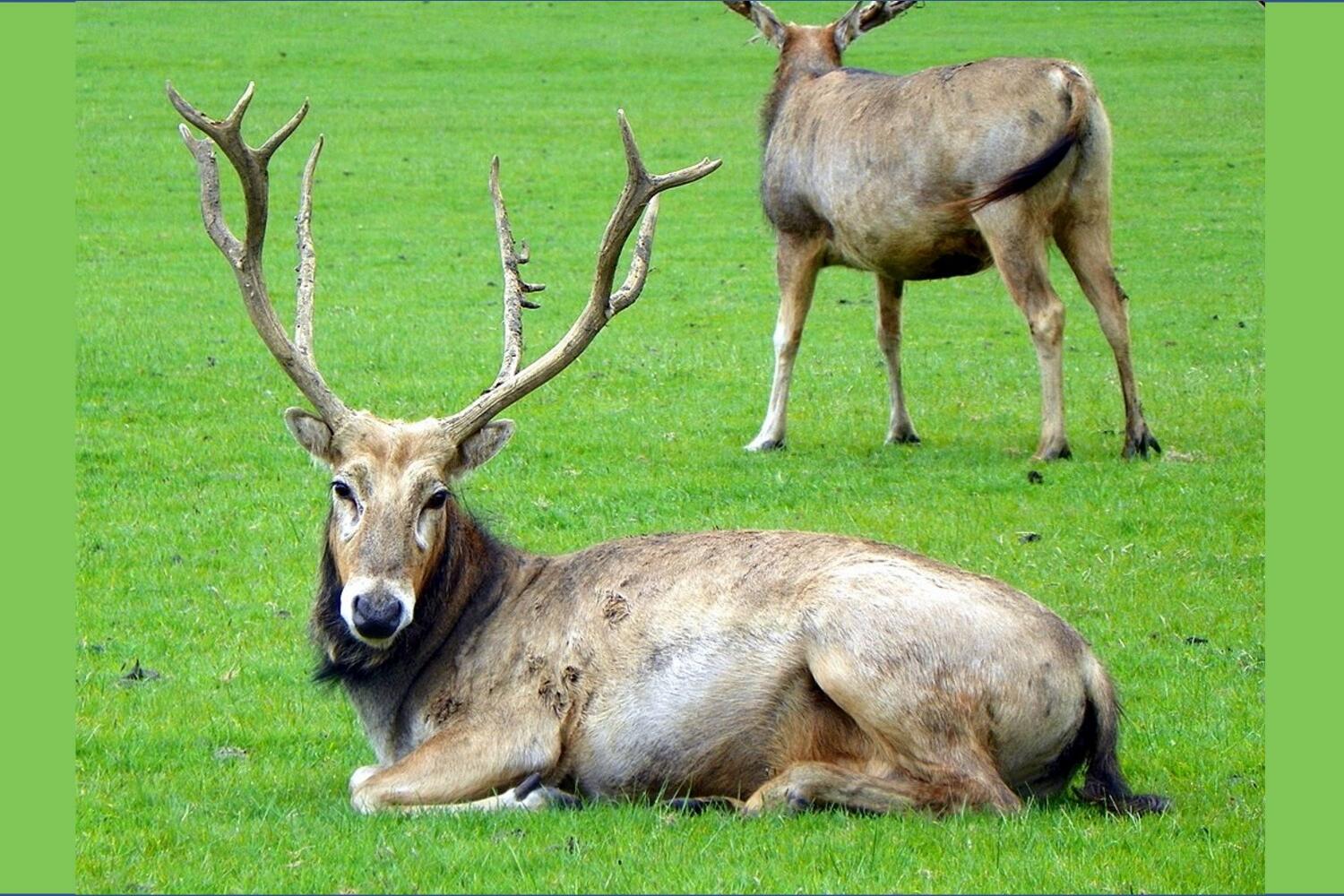 URBANA, Ill. – China’s Père David’s deer was nearly gone in the late 1800s. Just 18 deer – the very last of their kind – were brought into captivity after the rest had been hunted to extinction. When 11 of the deer reproduced, the species had a chance. Today, after centuries of reintroductions and breeding under human care, the population sits at around 3,000.

It’s a success story. But that success could come crashing down if chronic wasting disease (CWD) were to infect the population. The disease is always fatal, causing holes to form throughout the brains of affected individuals, and the infectious agent is nearly impossible to destroy. Rampant in North American deer populations, the disease is now spreading across the world.

But there may be reason for cautious optimism. According to a University of Illinois-led study, Père David’s deer has gene variants that may naturally protect the animals from the ravages of CWD.

“The gene variants we found in Père David’s deer have been linked to reduced susceptibility to CWD in other species. Studies would have to be done in this species to know if the gene variants really have the protective effect, but this is a good starting point to understand potential susceptibility,” says Tolulope Perrin-Stowe, postdoctoral researcher at the University of Wisconsin-Madison. Perrin-Stowe led the research during her doctoral program at the University of Illinois.

Chronic wasting disease is caused by infectious prions, strange proteins that trigger normal proteins in the brain to fold abnormally and clump together. Infectious prions are also responsible for mad cow disease and Creutzfeldt-Jakob disease, among others.

Although prions get a lot of bad press, all mammals make normal prion proteins. They’re thought to play a role in our brain’s biochemistry, and scientists know which gene codes for them. Things only go wrong when the gene mutates, as in certain forms of Creutzfeldt-Jakob disease, or when an infectious prion (the misfolded form of the normal protein) enters the host. That initiates a chain reaction causing normal prion proteins to change shape and go rogue.

The gene for prion protein synthesis is known as PRNP, and it’s highly conserved across mammalian species. That means there’s very little variation in the gene among individuals, even across species or through evolutionary time. Highly conserved genes are usually important for basic biological functioning, but scientists still don’t have a clear understanding of the role prion proteins play in our brains.

It’s also important to consider the genetic implications of the deer’s near-extinction.

“When populations grow from very few founder individuals – in this case, the 11 deer that re-started the species – genetic diversity is typically much lower than in populations that avoid such bottleneck events,” says Alfred Roca, professor in the Department of Animal Sciences at U of I and study co-author.

Given this unique genetic scenario, it was a double surprise when the researchers found not one but two PRNP gene variants in Père David’s deer.

“We would assume because the current population is descended from only 11 founders that there wouldn't be much variation in the gene. Also, because the prion gene is quite conserved, there tends to be less variation in general. So, it was surprising to find two variant forms, one of which is strongly associated with reduced CWD susceptibility in other deer species,” Perrin-Stowe says.

To make this discovery, Perrin-Stowe and her colleagues sequenced the coding region of the PRNP gene in 27 Père David’s deer from zoos in Ohio, California, and New York. Most of the 27 carried the gene variant previously found to be associated with lower CWD susceptibility in other deer species, but a few individuals had a variant never before described in deer. According to research in sheep, that variant may also provide a protective benefit against CWD.

Although the results are promising, the researchers say the deer would have to be exposed to CWD to see if they’re really resistant. Natural exposure hasn’t happened so far, fortunately, and experimental exposure would be unrealistic in an endangered species. So for now, the genetic variants remain a good sign, not a guarantee.

“We suggest that both variants should be maintained in Père David’s deer populations. Deer can be exposed to multiple strains of CWD prions in the environment. The genetic variants may react in different ways. So that's why it's important to keep both variants; one might be more protective against a given strain,” says Yasuko Ishida, research specialist in animal sciences and study co-author.

Nohra Mateus Pinilla, director of the veterinary epidemiology laboratory of the Illinois Natural History Survey and study co-author, adds, “The genetic variations in the prion gene in this endangered species are analogous to some of the genetic variations we have found in the Illinois white-tailed deer. Studies under captive field conditions using natural mechanisms of exposure to CWD could provide further information about the ability of these variants to reduce the risk of infection to CWD.

“Nevertheless, the findings in this study give us hope the Père David’s deer populations have something that may help them fight CWD if they become exposed.”

The Department of Animal Sciences is in the College of Agricultural, Consumer and Environmental Sciences at the University of Illinois at Urbana-Champaign. The Illinois Natural History Survey is part of the Prairie Research Institute at U of I.