Researchers find tradeoff between water quality and emissions on the farm 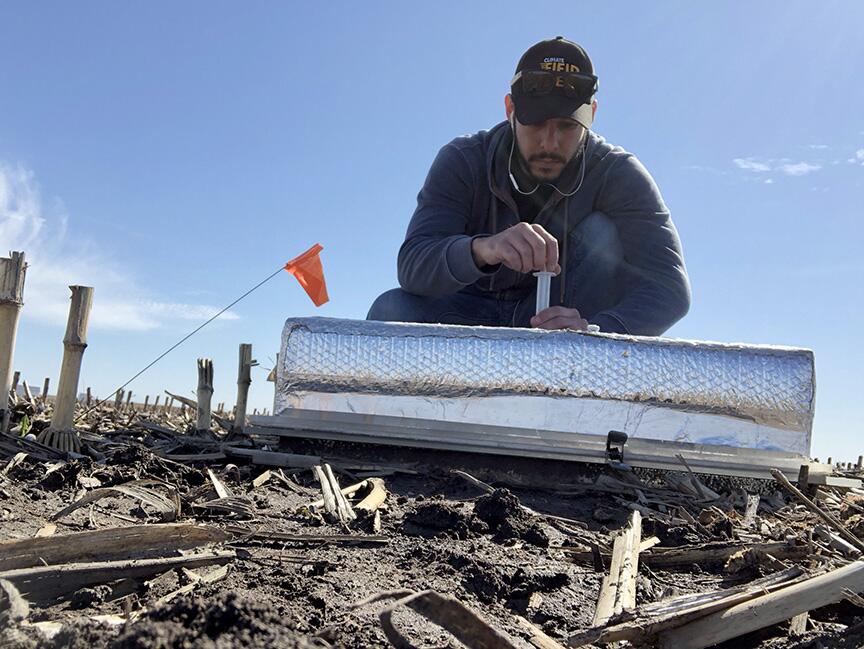 Researchers find tradeoff between water quality and emissions on the farm

URBANA, Ill. – With water quality guidelines compelling more farmers to act on nitrogen loss, cover crops and split nitrogen applications are becoming more common in the Midwest. But new University of Illinois research shows these conservation practices may not provide environmental benefits across the board.

“As researchers, we tend to look at one type of pollution at a time. Ours is one of the first studies to evaluate the nitrogen cycle more holistically. Conservation practices relating to water quality have gained a lot of attention lately, but it’s also important to know how they might affect emissions of nitrous oxide, an important greenhouse gas contributing to climate change,” says Giovani Preza-Fontes, who worked on the study as a doctoral student in the Department of Crop Sciences at U of I. Preza-Fontes is now a postdoctoral researcher at Purdue University.

As greenhouse gases go, nitrous oxide is a doozy. With a potency 298 times that of carbon dioxide, nitrous oxide is released when soil microbes metabolize nitrogen, an essential nutrient required to grow corn. When soils warm up in the spring and summer, microbes get to work on any nitrogen not taken up by crops, turning a portion into the powerful greenhouse gas.

Some farmers have moved away from the fall anhydrous application, splitting nitrogen between early spring and mid-season. Proponents say this split application is more precise, delivering the exact amount of nitrogen crops need in the moment and leaving less in the soil to be lost in drainage water. Similarly, farmers plant cover crops to take up any excess nitrogen after crops are harvested.

But how do these practices perform in terms of nitrous oxide emissions?

Preza-Fontes, along with assistant professors Laura Christianson and Cameron Pittelkow (now at UC Davis), measured nitrous oxide emissions in corn fields across three seasons. They mimicked various conservation practices, including a pre-season nitrogen application only; split nitrogen applications in spring and at the V6 or V7 corn growth stage; split nitrogen plus a cereal rye cover crop; or no added nitrogen.

They found shifting from pre-season to in-season split nitrogen application did not influence nitrous oxide levels in any of the three years.

Instead, nitrous oxide spiked in plots with cover crops.

“For all three years, we saw greater daily spikes in nitrous oxide emissions with the combination of in-season split nitrogen application and cover crops, but those spikes did not translate into greater cumulative emissions, except for one year. I think this pattern indicates there is a potential for greater nitrous oxide emissions when we incorporate a cereal rye cover crop into our cropping systems,” Preza-Fontes says.

Interestingly, the spikes came in the summer, not immediately after cover crop termination.

“Nothing is going on in the field, operations-wise, in July or August. The cover crop has been dead for months at that point. So, for future research, we’ll want to figure out management strategies to do in the spring to help reduce the spikes that come with the cover crop later in the summer,” Christianson says.

The study used a burndown glyphosate treatment to kill the cover crops. The researchers say a different termination method, timing, or cover crop species could change the potential for nitrous oxide emissions, but they don’t yet know how.

“We usually use the carbon-to-nitrogen (C to N) ratio as an indication of how fast biomass will decompose. A grass such as cereal rye has a higher C to N ratio, which means they will decompose slower than a legume cover crop, which has a low C to N ratio,” Preza-Fontes says.

Either way, the researchers emphasize cover crops have been proven many times over to benefit water quality. And although cumulative emissions were greater in one year with cover crops, the conservation practice still has value.

“There's no perfect practice, but that doesn't mean we should abandon all of them. We know cover crops are good for water quality. Next steps would be to optimize the cover crop species, management, and tillage, so that we can continue to use cover crops for water and reduce the nitrous oxide spike later in the summer,” Christianson says.

Preza-Fontes adds, “We shouldn’t rely on only one practice to solve every environmental problem. I think knowing the limitations and advantages of each practice will be the most appropriate way of moving forward.”

The study was done at the Dudley Smith Farm. Christianson and her colleagues plan to host a field day in Taylorville on Feb. 10, where they will discuss continuing research on farm conservation practices and water quality. Register here.