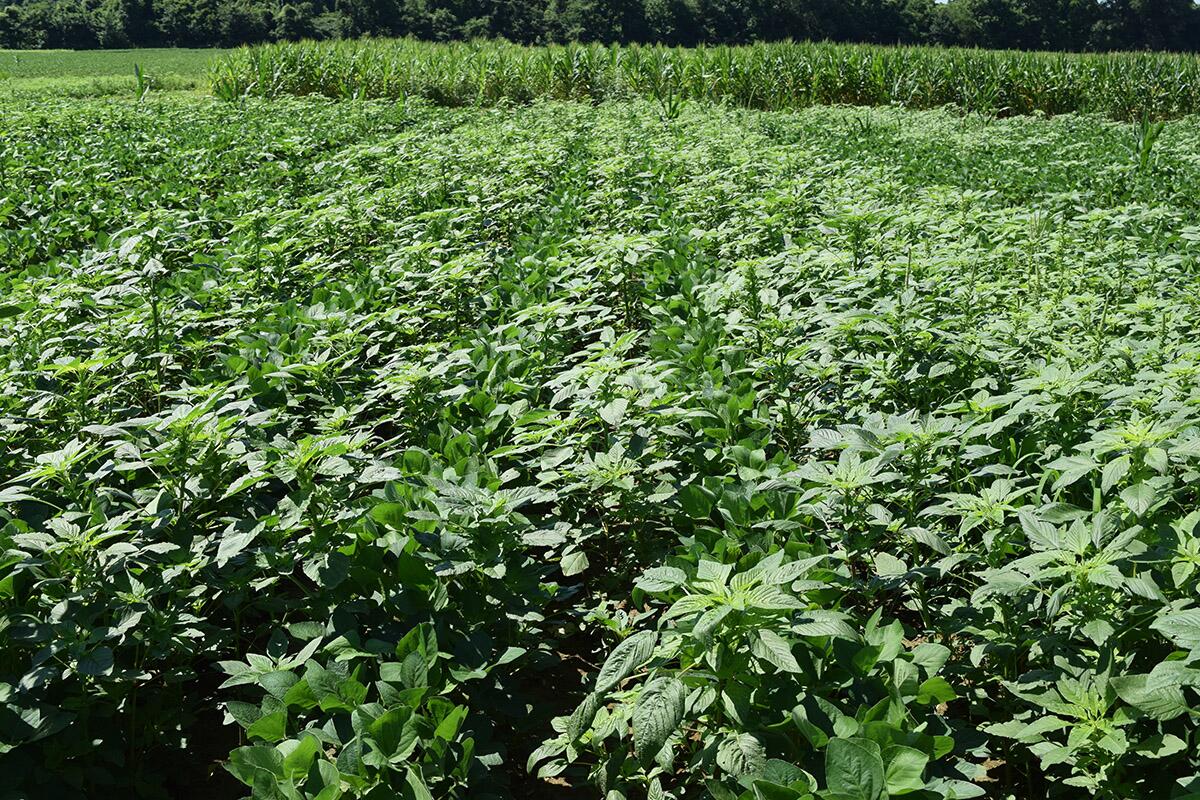 URBANA, Ill. – Representing some of the most troublesome agricultural weeds, waterhemp, smooth pigweed, and Palmer amaranth impact crop production systems across the U.S. and elsewhere with ripple effects felt by economies worldwide. In a landmark study, scientists have published the most comprehensive genome information to date for all three species, marking a new era of scientific discovery toward potential solutions.

“These genome assemblies will greatly foster further research on these difficult weed species, including better understanding the ways in which they evade damage from herbicides,” says Pat Tranel, professor and associate head of the Department of Crop Sciences at the University of Illinois and co-author on the Genome Biology and Evolution study.

Draft genomes had already been published for waterhemp and Palmer amaranth, but techniques used in the Genome Biology and Evolution study provide a much clearer and richer picture of the species’ gene sequences, a requisite for many genomic studies.

All three genomes were assembled using advanced long-read sequencing, which maintains the integrity and continuity of the genome similar to the way large puzzle pieces provide a clearer picture of the whole than small pieces. In Palmer amaranth, an additional sequencing technology (chromatin conformation capture sequencing) was used to further order pieces of the genome that were assembled using the long-read information.

“The goal of any genome assembly is to reveal the complete arrangement of genes in the genome, broken into chromosome-sized fragments. Unfortunately, until recently, quality genome assemblies have been very labor intensive and expensive. The previously published draft genomes for these species reported the genome broken into thousands of pieces, while the assemblies we report are down to hundreds. The vast majority of the sequence is now assembled into very large fragments,” says Jacob Montgomery, a graduate student working with Tranel and first author on the study.

To further improve the assembly of the genomes for waterhemp and smooth pigweed, the team used an innovative approach known as trio binning, developed in cattle. Not only had this technique never before been fully utilized in plants, it had also not been used with parents from different species.

In normal reproduction, male and female parents each contribute one copy of every gene to their offspring. In this case, offspring are diploid, meaning they have two copies of every gene. In the study, the team created hybrid offspring from two separate species: waterhemp and smooth pigweed. These offspring are still diploid, but the trio binning technique allowed the researchers to pull apart and isolate the two copies from each parent species, resulting in haploid (single copy) genomes for each.

“This approach resolved a problem in the previous waterhemp genome assembly. When parent alleles (copies of each gene) are very different from each other, as is often the case in outcrossing species such as waterhemp, the genome assembly program interprets them to be different genes,” Tranel says. “With only one allele from each species, we were able to obtain a much cleaner assembly of their gene sequences.”

Detlef Weigel, director of the Max Planck Institute for Developmental Biology and co-author on the study, adds, “I am a big fan of the new advanced sequencing techniques, but even though they should theoretically be sufficient to sort out the arrangement of genes, in practice they are not. This is where genetics can help out, using information on whether genes were inherited from mom or dad. This allowed us to assign each gene to either a maternal or paternal chromosome.”

The researchers specifically chose waterhemp as the male parent in the smooth pigweed × waterhemp cross because the previously published waterhemp genome was from a female plant. Tranel is pursuing research to understand the genetic basis for maleness and femaleness in waterhemp and Palmer amaranth, with potential applications toward introducing female sterility as a future control method.

“The genomes of the male waterhemp and Palmer amaranth already have enabled my group to make rapid progress on identifying the potential genes that could be responsible for the determination of sex (male or female) in both species,” Tranel says.

Importantly, the genomes for all three species could start to chip away at the problem of herbicide resistance in these weeds. More and more, scientists are uncovering evidence of non-target-site or metabolic resistance in waterhemp and Palmer amaranth, allowing the weeds to detoxify herbicides before they can cause damage. Unfortunately, it is usually very difficult to determine which specific enzyme, among hundreds, is responsible for detoxifying the herbicide.

Now, researchers will essentially be able to sort through a list to find the culprit with the hope of either knocking out the enzyme responsible or modifying the herbicide molecule to evade detoxification.

“Innovation is essential for the future of agriculture. We at BASF are working continuously on improving our products and services including sustainable solutions for the management of herbicide-resistant weeds. We want to better understand the amaranth biochemical resistance mechanisms in order to offer farmers new products and solutions for optimal control of key weeds,” says Jens Lerchl, head of early biology research on herbicides at BASF and study co-author. Lerchl coordinated the Palmer amaranth genome work with KeyGene/Wageningen -The Netherlands.

“The area of genome sequencing is highly dynamic. That is why BASF chose KeyGene as the partner for both latest sequencing technology and bioinformatics. Together with the expertise of the University of Illinois and Max Planck Society, we were able to compare genomes and address specific biological topics,” Lerchl says. In addition to collaborating on this research, BASF is also a founding member of the International Weed Genomics Consortium (https://www.weedgenomics.org/), led by Colorado State University aiming at the sequencing and analysis of ten high priority key weeds.

Co-authors from KeyGene endorse the societal relevance of the results and of the public availability of the data. “In plant sciences, studying weed genetics is important for sustainability of future agriculture. Our results will hopefully stimulate scientists around the globe to start, continue, and boost research on the genetics of important weeds that currently reduce yields, increase costs, and cause environmental burden,” says Antoine Janssen, genome informatics expert at KeyGene.

The article, “Draft genomes of Amaranthus tuberculatus, Amaranthus hybridus, and Amaranthus palmeri,” is published in Genome Biology and Evolution [DOI: 10.1093/gbe/evaa177]. The research was supported by USDA’s National Institute of Food and Agriculture, the International Max Planck Research School, and the Max Planck Society.